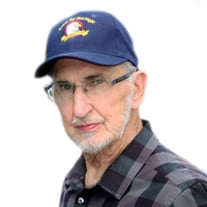 Donald Lackey, 85, of Kearney, died on Wednesday, May 2, 2018 at Brookdale Northridge in Kearney. Memorial services will be on Saturday, May 12, 2018 at 1:00 p.m. at First Baptist Church in Kearney. Pastor Sean Dougherty will officiate. Private family inurnment will be prior to services. There will be no visitation. Memorials are suggested to First Baptist Church Building Fund. No flowers or plants, please. Online condolences may be submitted by visiting www.hlmkfuneral.com. Horner Lieske McBride & Kuhl Funeral and Cremation Services in Kearney are in charge of arrangements. Don was born in Paxton, IL on August 21, 1932 to George and Lula (Dietterle) Lackey. Don was the older of two sons. His childhood was spent in Loda, IL where his parents owned the general store. He always wanted to try a career in baseball but realized a batting average that approximated his weight prevented that, so he went to umpiring school in Florida and became a minor league umpire for two years. Don completed his military obligation in the Korean War. After the war, he enrolled in college at Eastern Illinois, and after four years working for the Illinois Youth Commission dealing with juvenile delinquents, he began his teaching and coaching career in Ashton, Illinois. In Ashton met Clara, a widow with two children, Bill and Becky, and they had Julie together. Don completed his PhD at the University of Iowa, and then moved the family to Kearney, Nebraska where he completed a 29-year tenure at UNK. He was inducted into the UNK Athletic Hall of Fame in 2004 for Meritorious Service. He served on the staff from 1969 until his retirement in 1998, providing invaluable service to coaches, athletes and students. From 1971 until retiring, he served as chairman of the Department of Health, Physical Education and Recreation and Leisure Studies. Don was deeply involved in the planning for, and occupation of, the Health and Sports Center and the renovated Cushing Coliseum. When Don first arrived at UNK, he was an assistant football coach for two years before being named department chairman. His retirement saw cancer, the death of Bill, RV winters in the south, and a two year stay in Lincoln. Work in the church was very important and rewarding to him. There have been many more days of joy and blessings than sorrows and pains and we thank God for the years He granted. Survivors include daughters, Becky and husband John Ciemnoczolowski of Hastings, Julie and husband Dennis Florom of Lincoln; eight grandchildren; five great-grandchildren. Don was preceded in death by his parents; wife, Clara; 1 brother, Dean; son, Bill Jeter.

Donald Lackey, 85, of Kearney, died on Wednesday, May 2, 2018 at Brookdale Northridge in Kearney. Memorial services will be on Saturday, May 12, 2018 at 1:00 p.m. at First Baptist Church in Kearney. Pastor Sean Dougherty will officiate. Private... View Obituary & Service Information

The family of Donald Lackey created this Life Tributes page to make it easy to share your memories.

Send flowers to the Lackey family.