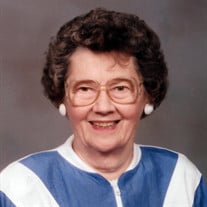 Dorothy ‘Bert’ Roberta (Ingalls) Corrigan, age 99, formerly of Kearney, passed away Monday, December 14, 2020 at CountryHouse in Lincoln less than five months short of her 100th birthday. Private family graveside services will be held at the Kearney Cemetery with Pastor Melody Adams officiating. Memorials are suggested to the First United Methodist Church in Kearney. She was born in Cairo, NE on May 8, 1921 to Ray and Edna (Nielsen) Ingalls. After graduation from Cairo High School in 1939 and an expansion of Ingalls Grain Company in the same year, the family moved to Kearney. She attended Hastings college for one year and Nebraska State Teachers College at Kearney (now UNK) for one year. On December 10, 1942, she married Clarence LeRoy "Roy" Corrigan. She worked at the Kearney Air Force Base while Roy was stationed overseas in Okinawa and training to invade Japan. When reunited after the war they established their home in Kearney where Roy worked at the Ingalls Grain Company. Bert loved her work as a stay-at-home mom in Kearney. Raising her children was her number one priority. She was a Cub Scout leader, CampFire leader and enjoyed the baseball games, cheerleading, track, and golf events of her children and grandchildren. She was active in Women’s Circle at the Kearney First United Methodist Church, where her parents and in-laws both belonged. She was an avid bridge player. She is survived by daughter Beth (Corrigan) Otto of Lincoln, NE, grandchildren Tina Corrigan of Gothenburg, NE, Pam (Corrigan) Yunker of Omaha, NE, Stephanie (Corrigan) Corral of Omaha, NE, Lori (Otto) Olson of Conroe, TX, Rich Otto of Lincoln, NE, great grandchildren, and extended family. She was preceded in death by parents Ray and Edna Ingalls, infant son Roger Corrigan, husband Roy Corrigan, and son Reed Corrigan.

The family of Dorothy 'Bert' Roberta Corrigan created this Life Tributes page to make it easy to share your memories.

Send flowers to the Corrigan family.