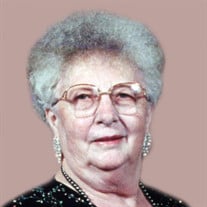 Dorothy J. Gould, 87, of Kearney, died Wednesday, November13, 2019 at the Kearney Regional Medical Center. Funeral services will be 10:00 a.m., November 19, 2019, at Horner Lieske McBride & Kuhl Funeral Chapel with Denice Dietz officiating. Burial will be at the Arcadia Cemetery following the service. Visitation will be from 5:00 to 7:00 p.m., November 18, 2019 and one hour prior to the service at the funeral home. Memorials are suggested to the St. Jude’s Childrens Hospital or Disabled American Veterans. Dorothy was born August 19, 1932 in North Platte, Nebraska to Lester and Eva (Smith) Kuhn. Dorothy married Earl Gould on August 24, 1949 in Central City, Nebraska. They moved to Grand Island in 1954 where she worked as a waitress. In 1957 they moved to Kearney and continued to waitress at Paul’s Broiler. In 1963 Dorothy began working as a nurses aide at Good Samaritan Hospital and then began working at West Company in 1967 until 1970. Dorothy was a member of the Eagles Auxiliary, V.F.W. Auxiliary, and a cub scout leader. She enjoyed doing embroidery, puzzles, reading, gardening, and bird watching. Dorothy is survived by her sons, Larry Gould and wife Elaine of Kearney, Gary Gould and wife Ann Jeanette of Elm Creek, Dennis Gould and wife Peggy of Kearney; sister Joan Juett of Omaha, NE; eight grandchildren, 20 great grandchildren, 13 great great grandchildren. Dorothy was preceded in death by her husband, one daughter, one brother, and one brother-in-law.

The family of Dorothy J. Gould created this Life Tributes page to make it easy to share your memories.

Send flowers to the Gould family.