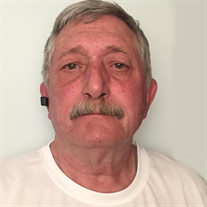 Douglas ‘Doug’ Robert Scheuffele, age 65, passed away February 17, 2022 at CHI Good Samaritan Hospital in Kearney. A Celebration of Life luncheon will be held on Saturday, March 12th at the Kearney Eagles Club at 12:30. Memorials are suggested to the family for future designation. Please visit www.hlmkfuneral.com to leave a tribute or message of condolence. Horner, Lieske, McBride & Kuhl Funeral and Cremation Services in Kearney are in charge of arrangements. Doug was born February 21, 1956 in Caldwell, ID to Ludwig and Dollie (Reed) Scheuffele. They moved to Marsing, ID. Due to the death of his parents, when Doug was 12, he and his brother Gary, moved to Loomis, NE and were raised by his Uncle Albert and Aunt Vera Reed. Doug’s favorite class was art and he lettered in football and wrestling. Doug graduated from Loomis High School in 1974 and moved to Kearney. Doug married Janice Ramsey on June 24, 1979 and they made their home in Kearney. Doug was in the National Guard from 1977-1989 and was tank commander in the Holdrege unit. He was honorably discharged with the rank of E6. Doug worked at West (Company) Pharmaceuticals, YRTC and the City of Kearney, retiring in 2015. He was past president of the Fraternal Order of Eagles and Eagle Riders. Doug had many hobbies including coin collecting, hunting, antiquing, fishing, motorcycles, wood turning and hand-crafted knives, the latter of which was his favorite. Doug sold his knives at many gun shows and created custom-ordered knives. Those left to cherish his memory are his wife, Janice of Kearney; daughter, Kristy (Dave) Foster of Omaha; son, Justin Scheuffele of Kearney; grandchildren, Jaxson and Jobey Foster of Omaha; Dagon and Denae Scheuffele of Kearney; sister, Janice Summers of Stanwood, WA; brother, Gary (Pam) Scheuffele of Kearney; as well as many nieces, nephews and extended family and friends. Doug was preceded in death by his parents; brother Melvin and sister Vickie.

The family of Douglas 'Doug' R. Scheuffele created this Life Tributes page to make it easy to share your memories.

Send flowers to the Scheuffele family.