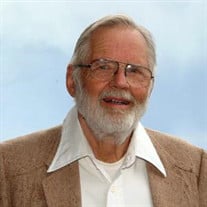 Douglas K. Lilly died on June 24, 2018 in his home in Amherst, Nebraska after a long illness. Doug was born in San Francisco, CA on June 16, 1929. He grew up in San Carlos and attended Stanford University, majoring in Physics. He served in the Navy during the Korean War on a minesweeper. Though he did not greatly enjoy his period of service, referring to it as the coldest time in his life, he appreciated the opportunity to travel to interesting places. In 1953, Doug entered a graduate program in Meteorology at Florida State University, where he met his wife, Judith Ann Schuh, to whom he would be married for over 63 years. As a research scientist, Doug focused on stratocumulus clouds; he performed fundamental research in the fields of meteorology and geophysical fluid dynamics, significantly enhancing our understanding of the mechanisms and processes within large scale weather patterns that led to our current ability to forecast storms. He worked to develop simulation and modeling of atmospheric convection for the United States Weather Bureau in Washington D.C as a Senior Research Scientist at the National Center for Atmospheric Research (NCAR) and the National Oceanographic and Atmospheric Administration (NOAA) in Boulder, CO, and finally as a Professor at the School of Meteorology where he held several Directorships and mentored numerous graduate students. In 1993 he received the prestigious Symons Gold Medal from the Royal Meteorological Society and on 1999 was elected a member of the National Academy of Sciences, one of the highest honors that can be accorded to a scientist. In 2002, he retired from the University and he and Judy moved to Nebraska to be closer to family. Although Doug had always been fascinated by weather, he had many other interests as well. During his time at Stanford, he was on the rowing crew, and throughout his life was an avid skier and energetic hiker. At 6'4" in height, he left most of his family struggling to catch up, then took them on "short cuts" down the mountain that didn't always quite work out but instilled a spirit of "finding your own path." He also loved gardening, birdwatching, and construction and built two of the family's homes. Although suffering from short term memory loss in his later years, he retained his quick wit and sense of humor. Most of all, he never let the bastards get him down! He is survived by his wife (Judy), a sister and brother in California (Margaret Poole and Andrew Lilly) three children, Kathryn Dunbar (Lafayette, CO), Donald Lilly (Longmont, CO), and Carol Lilly (Amherst, NE), and multiple grandchildren and great-grandchildren. He will be greatly missed. The family would also like to express their gratitude to the caregivers who made Doug's life so much richer during the last years and months of his life: Nancy Smolik, Brandon and Don Ulrich, Iris Shields, Juli Klingelhoefer, Tiphany Puga and Jessica Blair. Memorials are suggested to the family to be designated later.

Douglas K. Lilly died on June 24, 2018 in his home in Amherst, Nebraska after a long illness. Doug was born in San Francisco, CA on June 16, 1929. He grew up in San Carlos and attended Stanford University, majoring in Physics. He served in the... View Obituary & Service Information

The family of Douglas K. Lilly created this Life Tributes page to make it easy to share your memories.

Send flowers to the Lilly family.