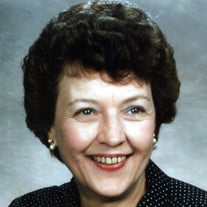 Elsie Irene Cafferty, age 85, of Kearney, passed away on Friday, October 18, 2019 at CountryHouse Residence in Kearney. Funeral services will be on Thursday, October 24, 2019 at 2:00 p.m. at First United Methodist Church in Kearney with Pastor Alan Davis officiating. Burial will follow at the Kearney Cemetery. Visitation will be Wednesday, October 23, 2019, from 6:00 p.m. to 8:00 p.m. at Horner Lieske McBride & Kuhl Funeral Home. Memorials are suggested to First United Methodist Church or AseraCare Hospice. Please visit www.hlmkfuneral.com to leave a tribute or message of condolence. Horner Lieske McBride and Kuhl Funeral and Cremation Services are in charge of arrangements. Elsie was born north of Elm Creek on August 8, 1934 to Earl and Marcella (Horton) Shuck. She grew up in Elm Creek, moving to Holdrege her senior year to graduate with the Holdrege High School Class of 1951. On November 11, 1951, she married Clarence Cafferty in Kearney. To this union, two daughters were born, Alesia(Lisa) and Marsha. The couple later divorced. Elsie attended and earned her Bachelors and Masters of Science in Home Economics from Kearney State College. She attended and earned her Doctorate of Education in Curriculum and Administration at the University of Nebraska Lincoln. Elsie served as a graduate assistant, teacher and then professor at University of Nebraska-Kearney during her nearly 30 years of teaching. Elsie was recognized by the University of Nebraska-Kearney Council of Deans for her Distinguish Contributions to the University in Service in 1993. She also was recognized for her 8 years of service on the State of Nebraska Department of Health and Human Services Regulation and Licensure Board and as an outstanding Vocational Educator by the Nebraska Professional Counselors Association. Elsie was an active member of many organizations throughout her life; serving as member Eastern Star, Sigma Beta Delta, Phi Delta Kappa, American Vocational Association, American Counselor Association and the First United Methodist Church. Elsie loved watching her grandchildren and great grandchildren with the delight of Christmas and birthdays on their faces. She enjoyed playing bridge with her friends, reading, sewing and quietly coloring. Elsie is survived by her daughters, Lisa Robison of Green River, WY, Marsha Nelson and her husband Dennis of Kearney; brother, Duane Shuck and his wife Pat of Lenexa, KS; grandchildren, Amy Heine, Gregory Heine and his wife Janelle, Andrea Steffen and her husband Chris, Christie Heacock and her husband Tom, Carissa Crocker and her husband Nate, Casey Nelson and his wife Jacqueline; 13 great grandchildren. Elsie was preceded in death by her parents and a son-in-law, Dave Robison.

Elsie Irene Cafferty, age 85, of Kearney, passed away on Friday, October 18, 2019 at CountryHouse Residence in Kearney. Funeral services will be on Thursday, October 24, 2019 at 2:00 p.m. at First United Methodist Church in Kearney with Pastor... View Obituary & Service Information

The family of Elsie I. Cafferty created this Life Tributes page to make it easy to share your memories.

Elsie Irene Cafferty, age 85, of Kearney, passed away on Friday,...

Send flowers to the Cafferty family.