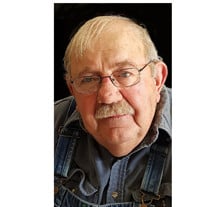 Emmett John Maul, Jr., 76, of Kearney, passed away Thursday, October 7, 2021 at Mother Hull Home in Kearney. Funeral services will be on Wednesday, October 13, 2021 at 2:00 p.m. at the Kearney Evangelical Free Church, 4010 7th Avenue, Kearney. Pastor Charles Bauer will officiate and burial will follow at the Riverdale Cemetery. A dessert reception will follow burial back at the Church. Visitation will be on Tuesday, October 12, 2021 from 5:00 p.m. – 7:00 p.m. at the Kearney Volunteer Fire Department, 2211 Avenue A as well as 1 hour prior to services on Wednesday at the Church. Memorials are suggested to the family or Kearney Volunteer Fire Department. Horner Lieske McBride & Kuhl Funeral and Cremation Services in Kearney is in charge of arrangements. To leave online condolences please visit www.hlmkfuneral.com Emmett was born on September 17, 1945 in Kearney, NE to Emmett Sr. and Marvlyn (Daake) Maul. He was baptized and confirmed in the Lutheran Church in Amherst. He graduated from Amherst High School class of 1963. After graduation, he attended auto body technical school in Omaha. Emmett married Carol Jean Silas on June 6, 1965 in Kearney. To that union 2 sons, John & Joe, were born. Emmett owned and operated Maul Body Shop in Kearney until 2001. After retiring from the body shop business Emmett worked for Morris Press, Brown Transfer and Century 21 Midlands. Emmett also worked at Mother Hull Home in Kearney for 13 years before retiring in 2020 due to health reasons. He especially enjoyed his time at Mother Home Hull Home and considered the staff there part of his extended family. It was comforting to know he spent his final days as a guest at Mother Hull Home where he, and his family, received exceptional care. Emmett was a member, and past President of Kearney Jaycees, as well as 56 year member of the B.P.O. Elks Kearney Lodge #984. He was a Boy Scout Master with Troop 136 while his sons were active in the Scouts. One of his favorite hobbies was brewing beer and he was a founding member of the Kearney Brewers Association. His beer won awards at the County and State Fair and was enjoyed greatly by many friends and family members. Emmett’s proudest association was his 45 years as a member of the Kearney Volunteer Fire Department. The love he had for his fellow firemen and firewomen cannot be overstated. They were, and continue to be a huge part of his life. Emmett literally passed away on the day of his 45th Anniversary as a member of the KVFD. It was also appropriate that he spent his final days at Mother Hull Home which is literally in the shadow of the Firehall. Left to cherish his memory are wife, Carol Jean of Kearney; sons, John and Petrina Maul, Joe and Mishelle Maul all of Kearney; grandchildren Gage Maul, Alyssa Maul, Erica Maul, Dayton and wife McKenzie Maul, who also blessed Emmett with his first Great Grandson, Bexton Maul born 6/20/21. Emmett and Carol Jean were also adopted grandparents to Kassie (Hartman) Quiroz, the daughter of a close family friend. Brother and Sister-in-Law, Don & Susie Maul, Brother-in-Law, Howard Strong along with many nieces and nephews who all enjoyed their time spent with Uncle Emmett. Emmett was preceded in death by his parents, Emmett Sr. & Marvlyn, Maul, sister Peggy Maul, and step-mother, Zola Maul.

The family of Emmett J. Maul Jr. created this Life Tributes page to make it easy to share your memories.

Send flowers to the Maul family.