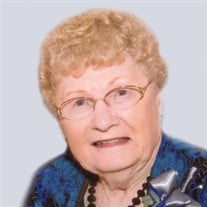 Evelyn M. Fees, 99, of Miller, died Tuesday, October 22, 2019 at Wel-Life in Kearney. Mass of Christian Burial will be 10:30 a.m., October 25, 2019 at St. John Capistran Catholic Church in Amherst with Fr. Alex Borzych officiating and Burial at Kearney Cemetery. Visitation will be from 5:00 to 7:00 pm, October 24, 2019 at St. John Capistran Catholic Church with wake service at 7:00 pm with Deacon Bill O’Donnell officiating. Memorials are suggested to St. John Capistran Catholic Church, Miller American Legion Auxiliary, or Miller Senior Citizens. Evelyn Mae was born May 24, 1920 to Elmer and Ida (Ehresman) Harnagel North of Miller on a farm in a new gray house that had been ordered from Montgomery Ward. She began her schooling at Wild Horse School, then Red Wing School, and later attended and graduated from Miller High School in 1937. She attended Kearney Normal School and earned her Teachers Certificate. Evelyn taught in rural schools north of Miller, including Red Wing, Victor Hill, and Cats Creek. During WWII Evelyn traveled to Washington D.C. and worked for the Officer Procurement Service under the War Department. She was a War Bonds Chairman and sold War Bonds and Savings Bonds during the war. She was assistant to the Chief of Personnel. At the end of WW II, she moved to North Hollywood, California and worked as a calculator operator for Lockhead Airplane Factory. When she returned to Nebraska, she worked for a short time as a Clerk Typist at the Kearney Air Base until it closed. Evelyn then became a licensed beautician. Evelyn married Clifford J. Fees on June 16, 1947 in Eddyville, Nebraska. They lived in Eddyville and operated a grocery store called “Cliff’s Store”. She operated a beauty shop in the upper level of the store. In January of 1953 they moved to the river farm, north of Miller. They had a son Kermit and a daughter Loye. In 1958 they moved to the farm in Dawson County. Clifford passed away June 3, 1962. Evelyn and her children moved to Miller in December of 1962, and she taught school in Miller for three years. On June 14, 1965, she became the Miller Postmaster and served for 29 years until she retired in March of 1989. Evelyn resided in Miller until June 2017, when she moved to Wel-Life in Kearney. Evelyn was a member of St. John Capistran Catholic Church in Amherst, serving in several offices of the Altar Society and teaching Eighth Grade Catechism. She also belonged to 351 Unit Miller American Legion Auxiliary for over 50 years, Miller Senior Citizens, Sumner Senior Citizens, 8ET40, Kearney Fraternal Order of Eagles Auxiliary, and National Association or Postal Employees. Evelyn was a wonderful Mother, Grandmother, and Great Grandmother. She greatly enjoyed all the activities and organizations of the Miller Community. She loved dancing, playing cards with family and friends, sewing, and cooking great foods for her family. She will always be a part of our lives. Evelyn is survived by her son, Kermit Fees and wife Linda; daughter Loye Wolfe and husband Lloyd all of Miller, NE; grandchildren, Jesse Fees and wife Sarah, Allison Varah and husband Joel, Randall Fees and wife Emily, Roxanna Fees and Matt Carrizales, Ryan Wolfe and wife Laura, Carmen McMahon and husband Dan, Trevor Wolfe; great grandchildren, Nolan and Luther Fees, Evelyn and Hudson Varah, Jacob and Olivia Wolfe, and Tucker McMahon. Evelyn was preceded in death by her husband, two brothers, Lee and Chub Harnagel, and two sisters, Opal Davis and Ruby Harnagel.

The family of Evelyn M. Fees created this Life Tributes page to make it easy to share your memories.

Send flowers to the Fees family.