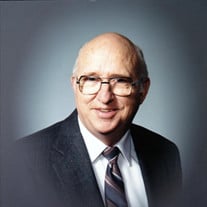 Dr. Frank Kamm, 93, of Kearney, formerly of Blue Hill and Hastings, Nebraska, died Wednesday, June 30, 2021, at Good Samaritan Hospital in Kearney. Services in commemoration of a lifetime of caring will be held at First Baptist Church in Kearney at 10:30 a.m. on Wednesday, July 7, with Rev. Mark de Kluyver officiating. Interment will take place at the Roselawn Memorial Cemetery in Columbus, Nebraska, in a graveside service at 10:00 a.m. on Thursday, July 8, with military honors graveside and a reception to follow at Wunderlich's, just north of the cemetery. Please visit www.hlmkfuneral.com to leave a tribute or message of condolence. Horner Lieske McBride & Kuhl Funeral and Cremation Services of Kearney are in charge of arrangements. Frank was born on July 1, 1927, the ninth of 11 children, to Elsena (Husmann) and Harry Kamm in Platte Center, Nebraska. He grew up spending summers working on an uncle's farm near Platte Center, and at the time of his graduation from Platte Center High School in 1944, entertained dreams of becoming a farmer or a veterinarian. At the end World War II, he enlisted in the U.S. Army, serving at Fort Riley, Kansas, in the massive military demobilization process from October 1945 to December 1946, continuing service as a 1st Lieutenant in the Army Reserve through December 1959. He attended York College in York, Nebraska, where he met and married his wife of 71 years, L. Faith Megill, on August 30, 1949, graduating from that college in 1950. As he did not come from a farming family and since veterinary schools in Colorado, Kansas, and Iowa were swamped with in-state students on the GI Bill, he wound up pursuing a career in medicine. His long career in family practice then began after graduation from the University of Nebraska College of Medicine in 1955. Frank and family then moved to Blue Hill, Nebraska, in 1955, where he provided family practice services to a large area of South Central Nebraska until 1987. He served patients not only in Blue Hill but in many communities within a 30-mile radius, from Holstein, Roseland, and Campbell, to Glenvil, Deweese, Edgar, and Guide Rock. He often logged 33,000 miles per year in travel with his business vehicle, between daily visits to one or both of the hospitals in Hastings and Red Cloud, and many house calls to outlying communities and nursing homes. He considered himself fortunate to have been actively engaged in the civic life Blue Hill, serving on the School Board and board of the Commercial Bank and participating in activities of the Blue Hill United Methodist Church (when time allowed!). In 1987, Frank became Medical Director at the Hastings (NE) Regional Center, serving in that capacity for several years. He then embarked on a period of providing locum tenens services to a far-flung array of medical practices in need of temporary medical service coverage. This included Indian Health Service reservation hospitals on the Standing Rock Sioux Reservation in North Dakota; the Crow Reservation and the Rocky Boy Chippewa and Cree Reservation in Montana; and Indian Health Service clinics in Rapid City, South Dakota, and Poteau, Oklahoma. His fill-in services to private practices extended from Craig, Alaska, in the Alaskan panhandle, to North Dakota, New Hampshire, and Maine. The final years of his active practice involved filling in for many private practices scattered throughout the state of Nebraska, most notably Bloomfield and Osceola. He moved to Kearney Nebraska in 1994, during this phase of his career. Throughout his life, Frank maintained a deep connection to the land and appreciation of God's handiwork in the landscape around us. After retirement in 2001 he and his wife Faith could frequently be found on the back roads of South Central and Central Nebraska. He finally also became able to pursue his early dream of farming by participating more actively in the management of farm properties near Bladen and Blue Hill, Nebraska. He was blessed to have Mike Karr and family, of Blue Hill, as an extremely capable partner in charge of the season-to-season operation of these properties. Frank will be remembered with love and appreciation by his immediate surviving family: wife Faith of Kearney; daughter Diane Aleem and husband Jeff of Dallas, Texas; step grandson, Jason Aleem; granddaughter Kelsey and husband Nick Hobbs along with granddaughter Mallory, her husband Elgin Johnson, and great grandson Mekhi, all of the greater Dallas area; sister-in-law Mary Fae Kamm, and her children, niece Kay Kamm, and nephew Herbert Kamm, Jr., of Duncanville, Texas; son Phillip Kamm and wife Colleen of Kearney; granddaughter Kristen Kamm, currently in the process of moving to Eugene, Oregon from Boulder, Colorado; granddaughter Janell Kamm of Boulder, Colorado. The size of the network of MANY other nephews and nieces and their families (given Frank's 10 siblings!) precludes individual mention of all of them here; please know that you have all been treasured companions on his journey through life. Of special note is close friend of all of the family, Leora Augustin, of Columbus, a special bond to her being first established in Blue Hill. He was preceded in death by his parents, Elsena (Husmann) and Harry Kamm; son Steven Kamm; Kamm brothers Alfred, Albert, John, Herbert (until 2020, of Duncanville, Texas), Dick (until 2015, of Columbus, Nebraska); sister Minnie and husband August Janssen; and sisters Esther with husband Louis and son Larry Michaelson; Dorothy with husband Raymond, son Dale, and daughter Kathy Treinies; Hattie and husband Albert Jenny; Anna and husband Forrest Hergert. Please direct any donations to the Frank Kamm Memorial Fund. They will be distributed as deemed most relevant to the First Baptist (Kearney) Building Fund; the Blue Hill Community Foundation; a scholarship fund for graduates of Lakeview High School in memory of brother Dick Kamm; and a scholarship fund for religious-career-oriented students at the Baptist-affiliated University of Sioux Falls, South Dakota, in memory of Frank's son Steven Kamm.

Dr. Frank Kamm, 93, of Kearney, formerly of Blue Hill and Hastings, Nebraska, died Wednesday, June 30, 2021, at Good Samaritan Hospital in Kearney. Services in commemoration of a lifetime of caring will be held at First Baptist Church in Kearney... View Obituary & Service Information

The family of Dr. Frank Kamm created this Life Tributes page to make it easy to share your memories.

Send flowers to the Kamm family.