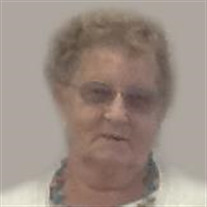 Frida Geisler, 90, of Kearney, died Wednesday, January 29, 2020 at Mt. Carmel Nursing Home and Rehabilitation. Mass of Christian Burial will be 10:30 a.m., February 3, 2020 at Prince Of Peace Catholic Church with Fr. Paul Colling officiating. Graveside services will be at 2:00 p.m. at the Pleasanton Cemetery. Visitaiton will be from 2:00 to 4:00 p.m., February 2, 2020 at Horner Lieske McBride & Kuhl Funeral Home and one hour prior to the service at the church. Memorials are suggested to Kearney Area Humane Society or Prince Of Peace Catholic Church. Frida Geisler was born on September 14, 1929 at home in Satteldorf, Germany. A few years later, the family moved to Burleswagen. She was one of 15 children born to Karl and Rosine Karoline (Kuhnle) Weller. She attended school until the eighth grade in Satteldorf. She then attended an industrial school for two years where she learned to sew, cook, garden, paint, and basic carpentry skills. The majority of her childhood was difficult as Adolf Hitler rose to power in 1933. She dreamed of becoming a nurse like her mother had been in WWI, but the war did not allow that dream to be fulfilled. Despite all the propaganda and indoctrination, her family never bought into Hitler’s ideology. Her family hid Jews and Mormon families in their basement from the Nazi regime. In all, she lost five siblings during the war. After WWII, Frida moved to Crailsheim where she became a nanny for a US Army family, John and Viola DeGram of Evansville, Indiana. The DeGrams helped arrange Frida’s travel to her two aunts in the Palmer, Nebraska area, made at the urging of Frida’s grandmother. Frida boarded the S.S. America on March 5, 1954 and docked in New York on March 10. The total price for the trip was $240. The S.S. America was a first-class cruise ship with many famous passengers including Princess Grace, King Edward VIII, Elizaeth Taylor, John Wayne and President Kennedy. From New York, Frida took a train to Grand Island, Nebraska. She resided with Karl and Martha Kurz in Palmer, Nebraska. On November 22, 1955 she married Bernard Geisler of Pleasanton in St. Mary’s Cathedral Catholic Church in Grand Island. She joined him on his father’s (Herman Geisler) homestead (south of Pleasanton). To this union four children were born and Frida obtained her US citizenship in 1959.The couple farmed together until their retirement in 1989. They sold the farm and moved to Kearney in 2004. Frida was known for her large gardens, her love of vibrant flowers and cacti, crocheting and knitting, men in uniform, motorcycle rides, and telling very animated stories to her grand and great-grandchildren. Even though her dream of being a nurse was not fulfilled she absolutely loved taking care of her pigs, cows, dogs and kittens. Recent highlights were her 85th birthday when she was treated to a ride in 1929 Ford driven by Bob Hand and on her 90th birthday when Officer Jace Schanou of the Kearney Police Department honored her with a ride in a police car to her birthday party. Frida is survived by her daughters, Nancy Lyon and husband Daniel of Kearney, Heide Epley and husband Pat of Pleasanton; sons, Jimmy Geisler and wife Karen of Kearney Steven Geisler and wife Sharon of Riverdale; 10 grandchildren, and 24 great grandchildren; sister, Elfeida Theim and husband Gunter of Aalon, Germany; brother, Walter Weller of Germany;; sister-in-law, Frieda Weller of Laichingen-Suppingen, Germany; numerous nieces and nephews. Frida was preceded in death by her husband, sisters, brothers, and one granddaughter Shanon Geisler.

The family of Frida Geisler created this Life Tributes page to make it easy to share your memories.

Send flowers to the Geisler family.