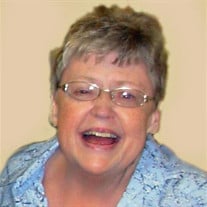 Genevive I. “Jenny” Greenfield, 66, of Amherst died Sunday, December 30, 2018 at Mt. Carmel Home and Rehabilitation Center in Kearney. Funeral Services will be Thursday, January 3, 2019 at 10:00 a.m. at the Evangelical Free Church in Kearney. Rev. Brian Klein will officiate. Graveside services and burial will be at 2:00 p.m. at Ft. McPherson National Cemetery near Maxwell, NE. Visitation is planned Wednesday from 4:00 – 6:00 p.m. at Horner Lieske McBride & Kuhl Funeral Home or prior to services Thursday at the church. In lieu of flowers memorials are suggested to the March of Dimes for Neonatal Care. Online condolences may be submitted by visiting www.hlmkfuneral.com Horner Lieske McBride & Kuhl Funeral and Cremation Services in Kearney are in charge of arrangements. Jenny was born September 10, 1952 in Columbus, NE to Leon and Inez (Lassek) Edic. She grew up in Columbus and graduated from Columbus Scotus High School then attended Platte Community College and graduated with a nursing degree. On April 15, 1972 she married Roy Greenfield in Columbus, NE. They were blessed with a daughter, Angela but regretfully lost her twin brother Erick at birth. She worked at Clarkson Hospital in Omaha for several years and due to poor health she retired and became a full time home maker. She and her husband moved to Buffalo County in 1980 and lived near Amherst. Jenny suffered a stroke in 2013 and lived at St. John’s, then moved to Mount Carmel Home. Surviving relatives include her husband Roy Greenfield of Amherst; daughter, Angela Greenfield of Kearney; brother, LaRoy Edic and wife Donna of Columbus, NE; sister, Pat Dohman of Humphrey. She always held a special place in her heart for sister-in-law Eunice and brother-in-law Bill Potter and Orival and Edna Greenfield. She was preceded in death by her son Erick in 1979 and 3 brothers. The family expresses deepest appreciation to AseraCare Hospice for their assistance.

The family of Genevive "Jenny" Greenfield created this Life Tributes page to make it easy to share your memories.

Send flowers to the Greenfield family.