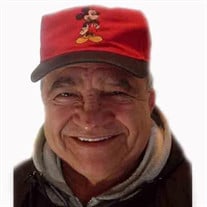 Giliybardo “Gil” B. Carranza, 81, of Grand Island, died February 16, 2022 at CHI Health Good Samaritan Hospital in Kearney. Memorial Mass will be 10:30 am, April 8, 2022 at St. James Catholic Church in Kearney with Fr. Joseph Hannappel officiating. Memorials are suggested to the family to be designated later. Gil was born February 5, 1941 in Kearney to Pedro and María (Gonzalez) Carranza. He grew up in Kearney and graduated from Kearney High School in 1960. Gil earned his master’s degree in Spanish and Education from Kearney State College. Gil married Tracy Cox on August 27, 1998 in Cozad, Nebraska. To this union, one son, Ángel was born February 1, 2002. Gil loved his job as a teacher. He taught in the Nebraska Public School System for over 50 years. He taught Spanish, P.E., English as a Second Language, and coached wrestling. After he retired, he enjoyed substituting in area schools for many years. Gil loved visiting with family and friends, dancing, music, and singing. One of his favorite things to do was bet the horses at Fonner Park, and most weekends during live racing that is where he could be found. Gil is survived by his wife, Tracy Carranza of Grand Island, NE; sons, Ángel Carranza of Lincoln, NE, Mael and Sarah Carranza of Phoenix, AZ; daughters, Lupe Carranza of Los Angeles, CA, Ana and Jacob Booth of Phoenix, AZ, Gaby and Seth Holt of Phoenix, AZ; grandson, Calvin Carranza of Phoenix, AZ; sisters, Hilda Rodriguez of Kearney, Josie Rodriguez of Kearney, Dee Antillon of Kearney; brothers John Carranza of Kearney, and Jim and Rosario Carranza of National City, CA., and many nieces and nephews. Gil was preceded in death by his parents, his sister, Cathy Castaneda; brothers, Atanacio (Nacho) Carranza, Joe Carranza, Emilio Carranza, and Eusebio Carranza.

The family of Giliybardo "Gil" B. Carranza created this Life Tributes page to make it easy to share your memories.

Send flowers to the Carranza family.