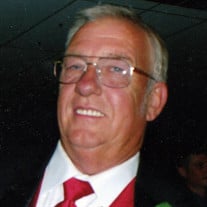 Hal D. Young, age 68, of Kearney, passed away Monday, January 13, 2020 at CHI Health Good Samaritan Hospital surrounded by his family and friends. Memorial services will be held at 2:00 p.m., January 17, 2020 at Horner Lieske McBride and Kuhl Funeral Chapel with Roger McDermott officiating. Memorials are suggested to the family to be designated later. Hal was born March 22, 1951 in North Platte, Nebraska to Harold and Margaret (Price) Young. He was the third of four children. He graduated from Lexington High School. Hal Married Rosalie Medina on July 17, 1989 in Las Vegas, Nevada. After many years on the road as a trucker, Hal started a career as an agent with Standard Life Insurance. For the past 30 years he worked as a transporter at Bridge Street Auto with his friends. His favorite past time was enjoying his family and buying McDonalds for his grandchildren. Hal is survived by his wife, Rosalie Young of Kearney; sons, Jeremiah Hogins of Kearney, Elijah Hogins and wife Mia of Lincoln, NE, Abraham Hogins and wife Amber of Kearney, Aaron Young of Kearney; grandchildren, Abraham II, Luca, London, Alyla, Charlotte, Amelia, Alyus, Adrian, Elena, and Augustus; many nieces and nephews. Hal was preceded in death by his parents.

The family of Hal D. Young created this Life Tributes page to make it easy to share your memories.

Send flowers to the Young family.