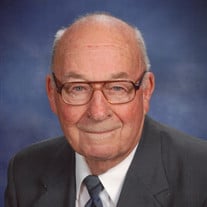 In loving memory of Harold W. Loschen, devoted son, husband, father, grandfather, great grandfather, uncle, cousin and friend. Harold, 92, passed away on Nov. 27, 2019 at the Veterans Affairs Medical Center in Grand Island, Nebraska. Memorial services will be 10:30 a.m., December 17, 2019 at the First Lutheran Church in Kearney with Rev. Rick Carlson officiating. Burial at Kearney Cemetery will follow the service with Military rites provided by the Nebraska National Guard Funeral Honors Team, Kearney American Legion Post #52, and Kearney V.F.W. Post #759. Memorials are suggested to the First Lutheran Church Radio Broadcast Fund. Harold was born on Nov. 5, 1927 at the farm home near the junction of Highways 10 and 4 in Franklin County, Nebraska. He was the eighth child of George and Gesina Loschen. Harold's father farmed and in the late 1930's also owned and operated a gas station at that location. Harold was baptized, confirmed and remained a lifelong member of the Lutheran church. He attended rural school until entering High School in Hildreth, graduating in 1945. After high school he worked at the hay mill in Lexington, and later at Grantham's Station in Kearney. Harold was drafted into the Army in March of 1946. He instead enlisted for 18 months and was honorably discharged in September 1947. Upon his discharge he enlisted in the Army reserves. He returned home and worked on family farms until June of 1949, when he went to work for the Union Pacific Railroad in Kearney. Harold was called back to active duty during the Korean conflict and was stationed in Ft. Sill, OK. On Oct. 1, 1950, he married Elaine S. Skinner. Following Harold's honorable discharge from the Army in September of 1951, they moved back to Kearney, where he resumed employment as a Freight Agent for the Union Pacific Railroad. He worked for nearly 40 years at the UPRR, retiring in 1989. He also spent over 30 years building houses in and around the Kearney area. He was a member of the First Lutheran Church, the American Legion, the Union Pacific Old Timers and the Kearney Elks Lodge. Harold will long be remembered for his quick wit, sense of humor, and card playing skills. He retained his memory and positive outlook on life and genuinely loved people. He knew no strangers, always making everyone feel comfortable and welcome. He would often share two adages: "In life, you do what you have to do, not always what you want to do" and "It is what it is, we can't change it, so deal with it." He cared for his wife Elaine in their own home for nearly 10 years after she sustained debilitating strokes. Harold lived at the same home he and his wife had purchased in 1959 until his death. Survivors include daughter, Connie Beisner-Warling and husband Mark, grandsons Jason Loschen, Matthew (Eryn) Beisner, and Corbin Beisner; granddaughter Lauren Beisner; great granddaughter Molly Beisner; two sisters Minnie Jo Isom and Gladys (Bob) Barnes; and many nieces, nephews and friends. In addition to his wife Elaine, he was preceded in death by his parents, three brothers, three sisters, and beloved son, Jim.

The family of Harold W. Loschen created this Life Tributes page to make it easy to share your memories.

Send flowers to the Loschen family.