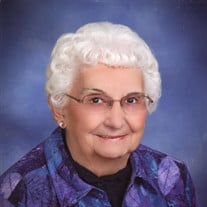 Helen E. Kinnaman, age 96, of Kearney, formerly of Amherst, passed away Saturday, August 8, 2020 at Mother Hull Home in Kearney. Mass of Christian Burial will be 10:30 a.m., Wednesday, August 12, 2020 at Saint James Catholic Church in Kearney. Burial will follow the Mass at the Stanley Cemetery near Amherst. Visitation will be 5:00 p.m. to 7:00 p.m., Tuesday, August 11, 2020 with a Christian Wake Service to follow at 7:00 p.m., all at Saint James Catholic Church. Memorials are suggested to Saint John’s Catholic Church of Amherst, the Amherst Fire Department or the Buffalo County Historical Society. Please visit www.hlmkfuneral.com to leave a tribute or condolence. Horner Lieske McBride & Kuhl Funeral and Cremation Services in Kearney is in charge of arrangements. She was born to Joseph and Mary Axmann north of Amherst on March 19, 1924. She had always lived in or near Amherst. She and Carroll Dean Kinnaman of Holdrege were married in Little Rock, Arkansas on June 19, 1943. Carroll and Helen operated the Kinnaman Confectionery hang out for after school and ball games for youngsters for more than 10 years. She was school secretary for 10 years, until she became Postmaster at Amherst in April of 1979. She retired in October of 1992. She volunteered at the Good Samaritan Hospital gift shop, was a life member of the Miller American Legion Auxiliary and was a member of the Buffalo County Historical Society. Survivors include her two sons, Carroll Dean Kinnaman Jr. of Bloomington, IL. and Chuck (Julie) Kinnaman of Kearney; two daughters, Carolyn (John) Schroll of Grand Island and Constance (Jerry) Ryan of Plano, TX.; 11 grandchildren; 20 great grandchildren; and 2 great great grandchildren. She was preceded in death by her parents; husband Carroll in 1987; daughter in law, Karen Kinnaman; brothers, Willie, Walter, Joe and Carl; sister, Anna Supanchick; step brother, Raymond Axmann; step sisters, Pauline Mays and Martha Richards; and a step grandson Gregory Ryan.

The family of Helen E. Kinnaman created this Life Tributes page to make it easy to share your memories.

Send flowers to the Kinnaman family.