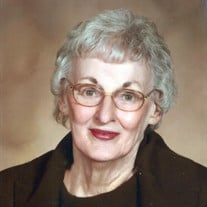 Irene J. Meredith, age 90, of Kearney, passed away Friday, October 15, 2021, at Kearney Regional Medical Center. Funeral services will be on Tuesday, October 19, 2021 at 11:00 a.m. at First Presbyterian Church in Kearney. Pastor Clint Cozier will officiate. Private family burial will be later. Visitation will be 1 hour prior to services at the church on Tuesday. Memorials are suggested to the Salvation Army or First Presbyterian Church Music Department. Please visit www.hlmkfuneral.com to leave a tribute or condolence. Horner Lieske McBride & Kuhl Funeral and Cremation Services in Kearney is in charge of arrangements. Irene was born to Frank and Amelia (Baker) Barth on June 26, 1931 in Hastings, Nebraska. She graduated from Hastings High School and later married Dr. Milton A. Meredith on April 9, 1950 in Hastings. She and Milton made their home in Kearney for over 65 years, raising their family of five daughters and actively participating in church and community activities. Irene greatly enjoyed her role as a mother and a homemaker. She was also an accomplished seamstress, sewing clothing, Halloween costumes, prom dresses, and much more. Interior design and decorating were among her many talents. She was a valued employee at both Top Hat Furniture and Ruter’s Bridal. Irene participated in various organizations in the community: Campfire Girls leader, Jaycee Wives, Salvation Army Advisory Board member, Job’s Daughters council member, and Patient Advisory Board appointee of Good Samaritan Hospital. She faithfully served First Presbyterian Church in many roles over the years, as a deacon, ordained elder, shepherd leader, 20-year volunteer wedding coordinator, and funeral committee volunteer. Irene’s memory will be cherished by her daughters and their families, as well as all those who knew and loved her. Survivors include daughters Dana Lang (John) of Westport, CT, Nancy Beitel (late Robert) of Mullen, NE, Marcy Stevens (Bill) of Kearney, Susan Kaniut (Chris) of Jacksonville, FL, Elizabeth Engel (Brent) of Hillsborough, NC, and sister Freddie Ewert of Bakersfield, CA. She was the proud grandmother of 13 grandchildren and 9 great-grandchildren. Her loving husband Milt, sister Paula Fullmer, son-in-law Bob Beitel, and several in-laws preceded her in death. Her faith, love of family, wisdom, and sense of humor are her greatest legacy.

The family of Irene J. Meredith created this Life Tributes page to make it easy to share your memories.

Send flowers to the Meredith family.