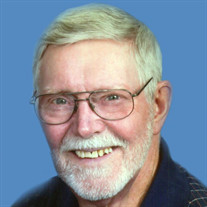 Jack W. Robson, age 83, of Minden, died peacefully, Saturday, August 21, 2021 at his home. Memorial services will be 2:30 pm, Thursday, August 26, 2021 at the First United Methodist Church with Pastor Matt Fowler officiating. Private family burial will be held prior to the service at the Kearney Cemetery. Visitation will be from 5:00 to 7:00 pm, Wednesday, August 25, 2021 at Horner Lieske McBride & Kuhl Funeral and Cremation Services in Kearney. Memorials are suggested to Kearney First United Methodist Church or the Kearney County Historical Society. Jack was born on October 15, 1937 in Mason City, Iowa and adopted by George Cecil and Vinta (Haradon) Robson on December 10, 1938. He attended grade school in Early, Iowa and graduated from Sac City, Iowa in May 1956. He moved to Kearney in 1957 and married Julianne Young on August 30, 1958. Two children, Marc and Sally, were born to this union. Jack worked at Rockwell Manufacturing (1958-1966), Baldwin Filters (1966-1975), and Payne Larson Furniture until retirement in 2000. He married Tanya Schroer on August 1, 1986 at the First United Methodist Church in Kearney. Jack was baptized and confirmed in the First United Methodist Church in Kearney where he was an active member until his health failed. His favorite recreation was work and more work, and his retirement years were filled with helping on the farm, mowing, painting, and woodworking. Handyman and perfectionist describe him well. He was always willing to lend a hand. He enjoyed bowling, fishing, sprint car racing, all sports, and was hopeful he would be here to watch the first Husker football game in 2021. Jack is survived by his wife, Tanya Robson of Minden; son Marc Robson of Denver, CO; daughter, Sally Mathis of Jackson, TN; Mother-in-law, Wilma Jones of Kearney; brother-in-law, Randall and wife Jere’ Sue Schroer of Kearney; sisters-in-law, Lynette and husband Dave Vickstrom of Burns, OR, Sheena and husband Kevin Raasch of Storm Lake, IA, Shawna and husband Steve Anderson of Lincoln, NE; numerous nieces and nephews, and a host of friends. Jack was preceded in death by his parents, grandparents, and nephew, Adam Nowlen.

The family of Jack W. Robson created this Life Tributes page to make it easy to share your memories.

Send flowers to the Robson family.