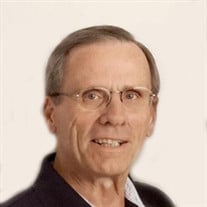 James ‘Jim’ Michael Asche, age 81, formerly of Kearney, passed away Friday, July 23, 2021 in Lewisburg, Pennsylvania. Funeral services will be 10:00 a.m., Wednesday, August 4, 2021 at Holy Cross Lutheran Church with Pastor John Rasmussen officiating. Burial will follow at the Kearney Cemetery. Visitation will be 5:00 p.m. to 7:00 p.m., Tuesday, August 3rd, at Horner Lieske McBride & Kuhl Funeral Home. Memorials are suggested to Kearney Legion Baseball, Kearney Competitive Girls’ Fast Pitch Softball or Holy Cross Lutheran Church. Please visit www.hlmkfuneral.com to leave a tribute or message of condolence. Horner Lieske McBride and Kuhl Funeral and Cremation Services in Kearney are in charge of arrangements. Jim was born on February 9, 1940 in Columbus, NE, to Milton & Ethel Asche. He was raised on a farm north of town. He graduated from Columbus High School in 1958. He graduated from the University of Nebraska-Lincoln in 1964 with a Bachelor of Science in mechanical engineering. He was a member of the DU fraternity and played freshman baseball. He graduated in 1970 from the University of Illinois with a Master of Science in applied & theoretical engineering. He married Janet Young on December 11, 1965 in Springfield, IL. They had two children, Michael and Jennifer. During his engineering career he worked for Allis-Chalmers in Springfield, IL, Behlen Manufacturing in Columbus, NE, and Baldwin Filters in Kearney, NE. At Baldwin, he was employed as the Director of Air Filtration & Laboratory for 20 years. Jim was an avid Husker fan. He also enjoyed attending UNK and KHS athletic events. He enjoyed coaching his children when they were young and more recently watching his grandchildren play sports. His hobbies were hunting and fishing. Survivors include his daughter Jennifer (Ruben) Bustamante of Lubbock, Texas; son Michael (Kathy) Asche of Lewisburg, PA; and five grandchildren, Derek Asche, Lauren Asche, Olivia Asche, Collin Bustamante, and Jace Bustamante. Preceded in death by his parents, sister Kay Nelson, and wife Janet.

The family of James 'Jim' M. Asche created this Life Tributes page to make it easy to share your memories.

Send flowers to the Asche family.