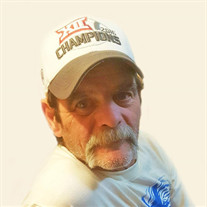 James R. “Jim” Welsh Jr., 62, of Shelby, Nebraska, died Saturday, December 29, 2018 at CHI Health Good Samaritan Hospital in Kearney. Memorial services will be 2:30 pm, January 3, 2019 at Horner Lieske McBride & Kuhl Funeral and Cremation Services in Kearney with Pastor Vic Rasmussen officiating. Private burial will be held at a later date. Memorials are suggested to the family to be designated later. There will be no visitation. Jim was born June 25, 1956 in Alamosa, Colorado to James R. Welsh Sr. and Eva (Ervin) Welsh. After graduating high school, Jim worked on oil rigs throughout Oklahoma with his father as a welder. Welding was not just a job to Jim, it was something he enjoyed doing throughout his life. Due to his health he retired as welding supervisor from Greystone Manufacturing in Columbus, Nebraska. One of Jim’s biggest accomplishments, was the Higgins Boat he made for the Veteran’s Memorial in Pawnee Park in Columbus. Jim married Nancy Wempen on November 12, 1993 in Osceola, Nebraska. He enjoyed spending time with his grandchildren, camping, boating, Oklahoma football, going to country music concerts, and traveling. Jim was proud of his Cherokee Indian Heritage. He will be missed by his “fur babies” Zoey and Chloe. Jim is survived by his wife, Nancy of Shelby, NE; daughters, Bryanna Welsh of Fremont, NE, Jennifer Woods of Chicago, IL, son Michael Welsh of Wisconsin; step-sons, Parry Siebenaler and wife Lisa of Wahoo, NE, Andrew Lopez and friend Miranda Seaely of Hastings, NE; step-daughter, Stacy Lopez of Eugene, OR; grandchildren, Gabby, Grace, and Harrison Siebenaler, Ash Lopez, Carsyn Welsh, and Sohpee Sealey; father and mother in law, Harry and Reva Wempen of Sumner. Jim was preceded in death by his parents.

The family of James R. "Jim" Welsh Jr. created this Life Tributes page to make it easy to share your memories.

Send flowers to the Welsh family.