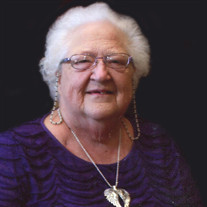 Janice Carol Shaw, 77, of Naponee, died February 2, 2019, at Mt. Carmel Home in Kearney. Funeral services will be 11:00 a.m., February 7, 2019 at Naponee Wesleyan Church in Naponee with Rev. Jay Brandon and Scott Randall officiating. Burial will be at the Naponee Cemetery. Visitation will be February 6, 2019 from 6:00 to 8:00 pm at Naponee Wesleyan Church and one hour prior to the service Thursday at the church. Memorials are suggested to the family for future designation. Jan was born November 28, 1941 in Clark, SD to Harold and Verna (Garey) Wahl. She graduated from Huron High School in South Dakota and attended Miltonvale Wesleyan College in Kansas. She married Larry R. Shaw on November 30, 1963 in Huron, SD, and they made their home in Naponee. Jan was a member of the Naponee Wesleyan Church, Imperial Wesleyan Church, and the Wesleyan Women. Jan was a pastor’s wife, farmer’s wife, and mother. She also enjoyed selling Avon for 50+ years. Jan enjoyed crafting, anything purple, decorating for each season and entertaining guests in her home. They accepted a call to pastor Imperial Wesleyan Church in Imperial, NE from 1981 through 1997 and they pastored Englewood Wesleyan Church in rural Kansas 1997 through 2005. Upon retiring from the ministry, they returned to their home in Naponee. In December 2017 Jan moved to Brookdale Kearney Northridge Senior Living. Surviving relatives include her son, Richard (Karen) Shaw of Wilsonville, OR and grandchildren, Madison and Parker of Wilsonville, OR; son, Robert (Trina) Shaw of Kearney and grandchildren, Marissa of Bartlesville, OK, Bethany and Jordan of Kearney; daughter, Robin (Blaine) Spady of Lincoln, NE and grandchildren, Eleanor and Silas of Lincoln, NE; sisters-in-law, Sharon Wahl of Lawrence, KS and Linda (Ray) Schluntz of Naponee; and many other extended family and friends. Jan was preceded in death by her husband, Larry; son, Ronald; granddaughter, Taylor; and brother, Darrel Eugene (Gene) Wahl.

The family of Janice C. Shaw created this Life Tributes page to make it easy to share your memories.

Send flowers to the Shaw family.