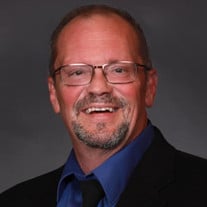 Jeff R. Arnold, 59, of Kearney, died November 19, 2021 at Kearney Regional Medical Center. Memorial services will be 1:00 pm, November 27, 2021 at the Horner Lieske McBride & Kuhl Funeral Chapel with Pastor Dean Pofahl officiating. Private family burial will be held at a late date. Memorials are suggested in lieu of flowers in honor of Jeff and may be made to the family to be designated later. Jeffrey was born October 10, 1962 in Council Bluffs, Iowa to Robert and Dorothy (Trumble) Arnold. He graduated from Sumner High School. He attended Kearney State College and was a member of the National Guard. He spent his career as a plumber, receiving his Masters and owning Arnold Plumbing, in Plattsmouth NE, later moving to Kearney and working for Snell Industries. He raised two sons, Dalton Cole and Sterling Alec with ex-wife and good friend Vicki Holoubeck. Jeff’s childhood hobbies included hunting and fishing and later turned to bowling, watching anything history and being a cat dad to Sassi, Bob, and Smokey. Jeff is survived by his son, Sterling Arnold of Omaha; brother, Pat (Betty) Arnold of Sumner, NE; sisters, Cheri (Chuck) Radtke of Loup City, NE, Connie (Bob) Gibson of Richland, NC, and Lisa (Butch) Arnold of Omaha, NE, significant friend Shari Keene and her kids Shelbie, Daniel, and David. He was preceded in death by his parents, his son Dalton, and brother Mike.

The family of Jeff R. Arnold created this Life Tributes page to make it easy to share your memories.

Send flowers to the Arnold family.