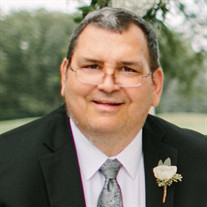 Jerry J. Blaha, 58, formerly of Kearney, loving father of two, passed away peacefully in his sleep on Thursday, August 22, 2019 at his Belle Terrace home in Tecumseh Nebraska. Memorial Mass will be 10:30 am, August 28, 2019 at Prince of Peace Catholic Church with Fr. Paul Colling officiating. Inurnment will follow the service at Kearney Cemetery. Visitation will be from 5:00 to 6: 30 pm, August 27, 2019 at the Horner Lieske McBride & Kuhl Funeral and Cremation Services, with a wake service following the visitation. Memorials are suggested to the American Cancer Society. Jerry was born on March 23, 1961 in Tilden, Nebraska to Leora (Richart) and Richard Blaha. The family relocated to Kearney, where he later attended Kearney Catholic High School, and excelled as a multisport athlete in football and was a two-time state champion wrestler. He continued his education and athletic career at Kearney State College and later devoted time to help coach and mentor wrestlers at his alma mater. Jerry’s charm and charisma would bring a smile to anyone’s face. He had a successful career in Sales and Management and was adored by his company and customers alike. Later in life, Jerry suffered from brain cancer and transitioned his efforts to help cancer survivors in Nebraska. He focused his time and energy on raising money for the American Cancer Society. He is survived by his son, Nathan Blaha and fiancée Olivia Marks of Scottsdale, AZ; daughter, Ashley Ryder and her husband Chris of Naperville, IL; his grandson, Jackson Ryder; his sister, Christine Welliver and her husband Doug of Pleasanton, NE; his brothers Jim Blaha and wife Terri of Council Buffs, IA and Doug Blaha and wife Jackie of Grand Rapids, MI; and several nieces and nephews. Jerry was proceeded in death by his father, mother and infant sister, Lori.

Jerry J. Blaha, 58, formerly of Kearney, loving father of two, passed away peacefully in his sleep on Thursday, August 22, 2019 at his Belle Terrace home in Tecumseh Nebraska. Memorial Mass will be 10:30 am, August 28, 2019 at Prince of Peace... View Obituary & Service Information

The family of Jerry J. Blaha created this Life Tributes page to make it easy to share your memories.

Send flowers to the Blaha family.