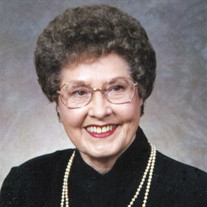 Jo Anne Jones, 87, of Kearney, died Thursday, May 17, 2018 at the Mother Hull Home. Funeral Services will be 10:30 a.m., May 22, 2018 at Faith United Methodist Church with Pastor Robert Perry officiating. Burial will follow at the Kearney Cemetery. Visitation will be from 5:00 to 7:00 p.m., Monday, May 21, 2018 at the Horner Lieske McBride & Kuhl Funeral Home and one hour prior to the service Tuesday at the church. Memorials are suggested to the Faith United Methodist Church or the American Diabetes Association. Jo Anne was born on July 24, 1930, in Holdrege to Stoy N. and Josephine (Lichtenberger) Smith. She graduated from York High School in 1948 and attended Kearney State Teachers College. She married Paul C. Baker and was later divorced. She married Carl Douglas Jones in Lincoln on July 17, 1953. Jo Anne worked at the Cornhusker Army Ammunition Plant near Grand Island where she was receptionist to the commanding officer and worked in the payroll office. She later worked at Platte Valley State Bank for ten years and was a real estate broker with Gateway Realty and managing broker with Kearney Realty. She was the first realtor in Kearney to become a Certified Residential Specialist. Jo Anne completed the Graduate Real Estate Institute at the University of Nebraska-Lincoln, and was a member of the National Association of Realtors. Jo Anne was involved with swimming from a young age as a life guard. She managed the Buffalo County Red Cross swim program for many years and was instrumental in starting the Kearney Swim Team. She was Regent of the local chapter of Daughters of the American Revolution and held many other offices in the organization. She was also a member of B.P.O. Does and the National Association of Retired Federal Employees. She was selected as Kearney’s Centennial Queen in 1973. She enjoyed playing bridge and belonged to several clubs. Jo Anne is survived by her daughters, Cynthia Lea Pope and her husband Rick of Ravenna, Kelli Sue Petersen of Kearney; son, Scott Douglas Jones of Kearney; grandchildren, Jeff Pope and his wife Jeanne of Ravenna, Amanda Bowman and her husband Mike of Kearney; and great grandchildren, Jaylea, Justine, and Johnathon Pope, and Kaylee Bowman. Jo Anne was preceded in death by her husband; brother, Stoy Robert Smith; sister, Judith Gail Perkins; and son-in-law, Arlen Petersen.

Jo Anne Jones, 87, of Kearney, died Thursday, May 17, 2018 at the Mother Hull Home. Funeral Services will be 10:30 a.m., May 22, 2018 at Faith United Methodist Church with Pastor Robert Perry officiating. Burial will follow at the Kearney... View Obituary & Service Information

The family of Jo Anne Jones created this Life Tributes page to make it easy to share your memories.