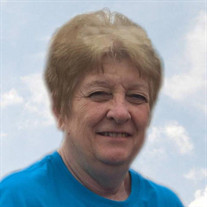 Jo A. Royle, 71, of Pleasanton, passed away Friday, November 20, 2020 at the Nebraska Heart Hospital in Lincoln, Nebraska. Funeral services will be 2:00 p.m., November 25, 2020 at Horner Lieske McBride and Kuhl Funeral and Cremation Services with Pastor Dean Hanson officiating. Burial will be held at a later date. Visitation will be from 5:00 to 7:00 p.m., November 24, 2020 at Horner Lieske McBride & Kuhl Funeral and Cremation Services and one hour prior to the service. Memorials are suggested to the family to be designated later. A recording of the service will posted on the funeral home website www.hlmkfuneral.com. Please follow the City of Kearney mask mandate and social distancing for those attending the visitation and service. Jo Ann Soule was born August 31, 1949 in Scottsbluff, Nebraska to Roy and Helen (Gibbs) Soule. She graduated from Bushnell High School in 1967. She earned her teaching degree from Kearney State College. Jo taught In Ord, Nebraska for two years and then in Hazard, Nebraska. Jo married Bob Royle August 8, 1969 in Wray, Colorado. She stayed home to raise their children. She later worked at Good Samaritan Hospital for 22 years. Jo and Bob most recently have owned the Red Dawg Saloon in Pleasanton. Jo was active in the Pleasanton community as she helped to establish the Pleasanton Rodeo and assisted with having a city display of fireworks for July 4th celebrations. Jo is survived by her husband, Bob Royle of Pleasanton; daughters, Kandy and Michael Eisenbarth of Lincoln, Kristi and Jeff Vollmer of Kearney; son Ryan and Ashley Royle of Litchfield; grandchildren, Margaret Eisenbarth, Korbin Eisenbarth, Vinnie Vollmer, Tony Vollmer, Kelci Vollmer, Rowdy Royle, and Rhyder Royle; sister, Judy and Steve Land of Gering, NE; brother, Mike and Sonya Soule of Bear River, WY; and sister-in-law, Kay Soule of Gering, NE. Jo was preceded in death by her parents; infant son, Rodney Royle; and brother, Ed Soule.

The family of Jo A. Royle created this Life Tributes page to make it easy to share your memories.

Send flowers to the Royle family.