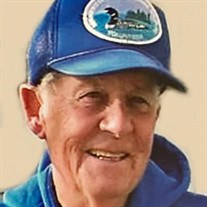 J. Paul Fritton, 93, of Kearney, Nebraska, died peacefully at his home Wednesday, February 9, 2022, with family present. Paul donated his body to the Anatomical Board for research. A celebration of life will be held at a later date. Memorials are suggested to MONA. To leave online condolences please visit www.hlmkfuneral.com. Horner Lieske McBride & Kuhl Funeral and Cremation Services is in charge of arrangements. Joseph Paul Fritton was born August 14, 1928, to Victor E. and Marie C. (Fox) Fritton in Albion, Nebraska, the youngest of three children. He graduated from Albion High School in 1946 and earned a Bachelor of Science Degree in Economics from Creighton University in 1950. Paul enlisted in the United States Air Force in January of 1951 and was honorably discharged that same year. He worked for the family-owned Albion Coca-Cola Bottling Company and Storz Beer Distributorship in the 50’s. In the fall of 1961, he returned to school at Kearney State College to pursue a teaching degree. With the encouragement of Harry Hoffman, Dean of the English Department, Paul started teaching English in 1962 as a Graduate Assistant and received his Master’s Degree in English in 1964 without having to write a Thesis. Paul sought a Doctorate Degree in English from the University of Northern Colorado. Although he never attained his PhD., he did ascend to the rank of Professor at Kearney State College and taught English until 1988 when he took early retirement. Paul became a fixture at Limmer’s Resort on Rush Lake near Ottertail Minnesota in the mid 60’s. He never missed a summer until the Covid pandemic ended an era in 2020. Although he never practiced it professionally, he was considered somewhat of a fishing guide, entertaining with his knowledge of Otter Tail County lakes and stories of yore, with Hans Hanebuth as his mentor. He became very close friends with owners of Limmer’s Resort, Kathy and Howard Manteuffel. Paul also had a close relationship with Bobbi and Scrub Sandrock, whom he rented a cottage from in their backyard in Kearney for nearly 44 years, with Bobbi being his personal nurse. Paul was also a regular at Dad’s Tavern and enjoyed the company of owners Gale and Ollie Dady and other regulars. Wendell and Chris Schoening were another couple that Paul consider family. Dave and Merylin Anderson too. Gary Zaruba, Bud and Betty Connell, and the list could go on. Paul enjoyed the Arts and was a big supporter of the Kearney Concert Association and attended UNK programs as well as the Kearney Symphony. He was known for his long walks and picking up litter. Paul was an avid reader and an intellect. Considered by many a unique and interesting individual. He did things his way with no regrets. J. Paul was preceded in death by his parents, his brother George V. Fritton and his wife Ellen, his sister Victoria “Tori” Kos and her husband Edward, and great nephew Brett Romberg. He leaves to cherish his memory fourteen nieces and nephews who adored him. Barbara (Mike) Romberg, Margaret (Jim) Martinosky, Mike (Tammy) Fritton, Theresa (Terry) Fichtner, Cecilia (Fred) Smiley, John (Angie) Fritton, Bill Fritton, Veronica (Mike) Trimble, Anastasia (Joel) Travis, Mary Agnes (Chris-deceased) Schafer, Pete (Teresa) Fritton, Rosemarie (Bernard) Schneider, Philip Kos, Katherine (Andrew) McGeorge, and many great and great-great nieces and nephews.

J. Paul Fritton, 93, of Kearney, Nebraska, died peacefully at his home Wednesday, February 9, 2022, with family present. Paul donated his body to the Anatomical Board for research. A celebration of life will be held at a later date. Memorials... View Obituary & Service Information

The family of Joseph Paul Fritton created this Life Tributes page to make it easy to share your memories.

Send flowers to the Fritton family.