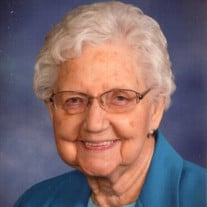 Josephine ‘Jo’ A. Bissell, age 95, of Kearney, passed away Thursday, August 22, 2019 at Mother Hull Home. Services will be on Friday, August 30, 2019 at 2:00 p.m. at First United Methodist Church in Kearney. Pastor Melody Adams will officiate and burial will be at the Riverside Cemetery near Gibbon, NE. Visitation will be on Thursday, August 29, 2019 from 5:00 p.m. – 7:00 p.m. at Horner Lieske McBride & Kuhl Funeral and Cremation Services in Kearney and also 1 hour prior to services on Friday at the church. Memorials are suggested to First United Methodist Church or AseraCare Hospice. Online condolences may be submitted by visiting www.hlmkfuneral.com. Horner Lieske McBride & Kuhl Funeral and Cremation Services in Kearney is in charge of arrangements. Jo was born on August 3, 1924 on a farm near Gibbon in rural Buffalo County, NE to George A. and Florence (Marshall) Bissell. She received her education in the rural schools of Buffalo County and later graduated from Kearney High School in 1941. She taught 3 years in rural Buffalo County Schools and then went to Mitchell, NE, Grand Island, NE and Kearney, NE. She also taught one summer at the A.O. Thomas School on the College Campus. Jo later attended Kearney State College where she earned a Bachelors of Science in Education Degree in 1955. She received the Educator of the Year award from the college in 1987. She taught for 44 years and 1 summer. Her hobbies included sewing, traveling, photography and China Painting. She was a member of First United Methodist Church, Delta Kappa Gamma for over 50 years, Kearney Retired Teachers Association, Buffalo County Historical Society, Golden K Kiwanis, Kearney Platte Valley China Painters Club and First United Methodist Circle. After moving to Regency Apartments she was on the board and took pictures of activities and the new residents. These were put in their scrapbook. Surviving relatives include her nieces and nephews, Vicki Bissell, Roger and Jackie Bissell, Eulah and Alex Gangwish and Dick Clark all of Kearney, Bill and Terri Clark of Elwood, NE, Don and Mary Clark of Thornton, CO, Evelyn and Steve Jones of Kansas City, MO and Bob and Diana Clark of Meansville, GA; great nieces and nephews, Marshall, Jason, Jeremiah, Benjamin, Eric, Corey, Tim, Christina, Angela, Jennifer, Becky, Denisa, Theresa, Rebecca, Dixie, Heather, Brian, Sam, Mary and Molly; other extended family and friends. Jo was preceded in death by her parents; sister and brother in law, Wanola and Earl Clark; brother and sister in law, Robert and Idell Bissell; niece, Karen Clark

The family of Josephine 'Jo' A. Bissell created this Life Tributes page to make it easy to share your memories.

Send flowers to the Bissell family.