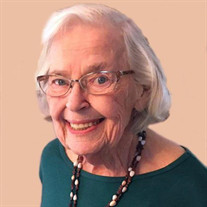 Juanita B. Cloyed, 90, of Kearney, died Tuesday, August 24, 2021, at Brookstone Gardens in Kearney. Memorial Services will be on Monday, October 18, 2021 at 10:30 a.m. at First United Methodist Church in Kearney. There will be no visitation or burial. Please visit www.hlmkfuneral.com to leave a tribute or message of condolence. Horner Lieske McBride and Kuhl Funeral and Cremation Services are in charge of arrangements. Juanita B. Cloyed was born on April 10, 1931 in Burlington, IA to Wran W. and Bessie A. (Talbert) Van Osdol. She attended Burlington High School and graduated in 1948. She attended Burlington Jr. College for two years before switching to the University of Iowa where she earned a bachelor’s degree in nursing. She married Richard D. Cloyed on April 7, 1951 in Burlington and worked for two years at Burlington Hospital while her husband was in Korea. After a belated honeymoon abroad, Connie Lorene was born in 1955, Richard Allen in 1958 and Catherine Diane in 1960 before the family moved to Kearney, Nebraska. Juanita worked as an RN as a young wife, took a sabbatical as full-time mother, and returned to nursing at Good Samaritan Hospital from 1968 until her retirement in 1996. As a mom, she took on the roles of den mother and campfire leader and made an excellent neighbor who loved to cook. She had many friends, loved playing the piano for her family to sing around and was known as one of the most kind-hearted women around. She was a long time member of First United Methodist Church, PEO Chapter EG, Faculty Wives Club, the Kearney-Monday Book Club, as well as Knit, Chat and Sew, and Kearney Community Theatre. She was active in AA and celebrated 48 years of sobriety last spring. She enjoyed world travel and the food, museums, music and theatre that came with them; as well as the silence of a Minnesota lake and fishing for her supper. She and Dick also participated in elderhostels and visited their far-flung friends, relations and children, and grandchildren, picking up a new book or game of bridge along the way. Surviving relatives include her children, Connie Cloyed (Robert Heywood) of Oregon, Richard Cloyed (Julie) of Montana, Catherine Snow (William Gutierrez) of Nebraska; as well as grandchildren, Emily (Ryan) Alderaen, Hannah Aronowitz, David (Cari) Cloyed, Jonathan (Jessie) Cloyed, Sarah (Nic) Marshall, Tosh Gutierrez, and, Juanita Snow, who lives in Kearney and cared for both of her grandparents in their home for the last several years. Grandma's pride and joy of recent years has been her great grandchildren, and, as of this summer, she claims an even dozen. She is also survived by a passel of nieces and nephews. She is preceded in death by her husband Richard; her parents; brothers, Forrest and Dean Van Osdol; and grandson, Jade Gutierrez.

Juanita B. Cloyed, 90, of Kearney, died Tuesday, August 24, 2021, at Brookstone Gardens in Kearney. Memorial Services will be on Monday, October 18, 2021 at 10:30 a.m. at First United Methodist Church in Kearney. There will be no visitation... View Obituary & Service Information

The family of Juanita B. Cloyed created this Life Tributes page to make it easy to share your memories.

Send flowers to the Cloyed family.