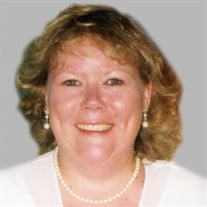 Julie M. (Plock) Bralick, 54, of Kearney, passed away Saturday, May 22, 2021 at CHI Health – Good Samaritan Hospital in Kearney. Funeral services will be 10:30 am, May 26, 2021 at Prince of Peace Catholic Church with Fr. Art Faesser officiating. Burial will follow the service at the Kearney Cemetery. In lieu of flowers, memorials are suggested to the family to be designated later. Julie was born August 14, 1966 in Kearney to Vaughn and Judy (Marriner) Plock. She grew up in Kearney and graduated from Kearney High School in 1984. She attended Kearney State College and Central Community College, where she earned her L.P.N. Julie practiced nursing in several nursing homes in Kearney for many years until her health began to decline. Nursing is a hard job, but Julie was very proud of herself to be a nurse. She received a lot of praise from the nursing home residents and their families for the loving care she provided over the years. Julie was fun to work with and a joy to be around. She loved her dogs, crafting, Christmas time, and eating breakfast for any meal. Julie was a loving wife, daughter, and friend whose sense of humor will be sorely missed. Julie is survived by her husband, Art Bralick of Kearney; stepdaughter, Emily Erpelding of Lincoln; mother, Judy Plock of Kearney; sister, Kelly Plock of Kearney; step-grandchildren, James and Brooklyn Erpelding; mother-in-law, Dorothy Grafton; sisters-in-law, Carmen Young, Rebecca Taylor, Joyce & Jimmy Presley, Liz and Dave James, Jean and Tad Stryker, Tammy Plock; brothers-in-law, Carl and Cheryl Bralick, Drew and Susan Bralick. Julie was preceded in death by her father, Vaughn; brothers, Bobby and Michael Plock; step-granddaughter Isabela Erpelding; father-in-law Carl Bralick.

The family of Julie M. (Plock) Bralick created this Life Tributes page to make it easy to share your memories.

Send flowers to the Bralick family.