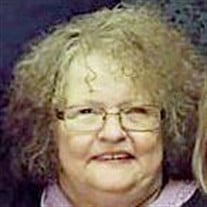 Kathy Dahlgren Cash, 68 years of age, of Kearney, Neb., passed away on November 25, 2019, at the Bertrand Nursing Home, surrounded by loving family and friends. Celebration of Life Services for Katherine “Kathy” Joan Dahlgren Cash, will be held at Horner Lieske McBride & Kuhl Funeral Home in Kearney, Neb. on Wednesday, Nov. 27, at 2:00 o'clock with Pastor Kenton Birtell officiating. In lieu of flowers, please consider donating to the Bertrand Nursing Home, they can be reached at (308) 472-3341. Please visit www.hlmkfuneral.com to leave a tribute or message of condolence. Horner Lieske McBride & Kuhl Funeral and Cremation Services is entrusted with the arrangements. Kathy was born on Christmas Eve, 1950 in Kearney, Neb., the first child of Wilbur C. Dahlgren and Joan (Anders). She was raised on a farm just north of Funk, Neb., and graduated from Axtell Community School in 1969. Kathy met Peter Janelli III at the Buggy Bath car wash in Holdrege, Neb. in 1968, and the following summer, they were united in marriage on July 27, 1969, at Mt. Calvary Lutheran Church, in Holdrege. Upon this marriage, Kathy gained a loving son, Peter Janelli IV, and later, the couple was blessed with two daughters, Janet Katherine Janelli and Jenon Roseanne Janelli. In 1979, Kathy was blessed with six stepchildren, Jerry Cash, Nick Cash, Ronnie Cash Harding, Bill Cash, and Darrin Cash whom she loved dearly, where they lived on an island on the Platte River. In 1983, they moved to Heartwell, where Kathy made many lifetime friendships. She later moved to Kearney in 1995, where she gained many more lifetime friendships, and “adopted” children, Mike Mehaffey, and Tiffany Devitt. Kathy was fiercely loyal to her family; her children, grandchildren, sisters, brothers, nieces, nephews, and friends...who she considered as, and were, family to her. Kathy welcomed children into her home through daycare, neighbors, and friends for years, and many of those children still hold a special place in their hearts for her. She loved board and card games and entertained many a friend and family member at her table. Her sense of humor and fun, loving spirit will be missed by many. Kathy was an avid reader and writer, she published a volume of Prairie Poems through the Phelps County Museum, and most notably, her poem “Farmer” was cataloged in the Library of Congress. Kathy is survived by her children Peter Janelli IV, Janet Janelli, and Jenon Janelli; grandchildren, Tylar Jenon Epp and Cale Johnson of Kearney, and Payton Janelli of Kearney; sister Rosanna (Bryan) Meyer of Bertrand, brothers Richard Dahlgren and wife Jill of Axtell, Frank Dahlgren of Funk, and baby sister Joey (Robert) Kugler of Bertrand, and two loving step-sisters, Valerie Wisdom of Lincoln and Veronica Larsen of Cozad. She is also survived by her special little cousin Myranda Brooke Otto and family; many nieces, nephews, cousins, friends and one aunt and one uncle. Kathy was preceded in death by her parents, and nephew Jonah Meyer.

The family of Katherine J. Cash created this Life Tributes page to make it easy to share your memories.

Send flowers to the Cash family.