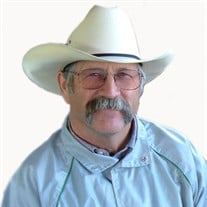 Larry H. Bailey, 73 of Gibbon, died on Friday, September 28, 2018 at his home with his family by his side. Funeral services will be on Wednesday, October 3, 2018 at 10:30 a.m. at Faith United Methodist Church in Gibbon. Pastor Michael Evans will officiate and burial will be at the Riverside Cemetery near Gibbon. Visitation will be on Tuesday, October 2, 2018 from 5:00 p.m. – 7:00 p.m. and also 1 hour prior to services on Wednesday all at the church. Memorials are suggested to the American Cancer Society Hope Lodge Omaha. Please visit www.hlmkfuneral.com to leave a tribute or message of condolence. Horner Lieske McBride and Kuhl Funeral and Cremation Services of Kearney is in charge of arrangements. Larry was born on April 19, 1945 to George C. and Anna L. (Jurgens) Bailey on their farm near Gibbon, NE. Larry attended District Three Country School through eighth grade then graduated Gibbon High School in 1963. He married Susan Reed on June 7, 1964 in Gibbon. Larry farmed and ranched in the Gibbon area his entire life. He was a member of the Faith United Methodist Church in Gibbon and also the Sons of the American Legion. He served on the Gibbon Board of Education from 1978-1990, and then as a governing member of the Education Service Unit 10 from 1992-2000. After High School Larry started working at Vern Reed’s Blacksmith Shop and Nebraska Central CO-OP. On October 4, 1967 after purchasing a farm near Gibbon, he moved his family to their home where they still reside. He started a trucking business and raised hogs along with his farming, later he raised cattle and was very proud of his herd. Larry enjoyed coaching Little League and golfing along with fishing and hunting in his earlier years. He loved attending his children’s sporting events and continued to enjoy them through the grandchildren. He loved history, family histories, as well as the Wild West. He loved antique cars, coffee at Arlene’s Café, straight rows in his corn fields, eating at noon in the kitchen with table full of help, old jokes and old dirty hats (the dirtier the better), horses and his pasture up north where friends helped with round up and brought home the herd, to later enjoy Susie’s abundant cooking. Surviving relatives include his wife, Susan of Gibbon; daughter Dana (Mark) Wagner of Austin, TX and their children, Micah Reed (Sarah) Wagner and son Corbin of Buda, TX, Keeley Anne Wagner and her fiancé Nick Morrow of Austin, TX and Kellen Bailey Wagner of Lubbock, TX; son, Lance (Julie) Bailey of Gibbon and their children, Katlyn Sue (Justin) Notter and their son Kannon of Lincoln, NE, Brie Anna Bailey of Hastings, NE and Alissa Jeanette Bailey of Gibbon; brother, George Bailey of Gibbon; sisters, Marla Dadey of Winterville, NC and Patricia Cook of North Richland Hills, TX; numerous other extended family and friends. Larry was preceded in death by his parents

Larry H. Bailey, 73 of Gibbon, died on Friday, September 28, 2018 at his home with his family by his side. Funeral services will be on Wednesday, October 3, 2018 at 10:30 a.m. at Faith United Methodist Church in Gibbon. Pastor Michael Evans... View Obituary & Service Information

The family of Larry H. Bailey created this Life Tributes page to make it easy to share your memories.

Send flowers to the Bailey family.