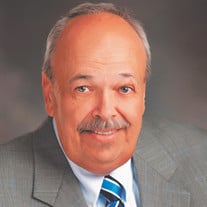 Larry E. Butler, 69, of Kearney, passed away Monday, December 2, 2019, in Las Vegas, NV. Services will be on Wednesday, December 11, 2019 at 10:30 a.m. at St. James Catholic Church in Kearney. Father Joe Hannappel will officiate and burial will be later. Visitation with family will be on Tuesday, December 10, 2019 from 5:00 p.m. – 8:00 p.m. at Horner Lieske McBride & Kuhl Funeral and Cremation Services in Kearney. In lieu of flowers, memorials are suggested to his family for later designation to the City of Kearney, Kearney Catholic High School, Kearney Public Schools, University of Nebraska at Kearney and the CHI Good Samaritan Health System Cancer Center. Please visit www.hlmkfuneral.com to leave a tribute or message of condolence. Horner Lieske McBride & Kuhl Funeral and Cremation Services in Kearney is in charge of arrangements. Larry was born on June 18, 1950 in Kearney, NE to James R. and Mildred L. (Sorensen) Butler. He attended Kearney High School and graduated with the class of 1968. Larry then attended Kearney State College, graduating in 1973, and later Creighton University School of Law, graduating in 1977. He was united in marriage to Barbara L. Falconer on June 7, 1982 in Tahoe. Larry was a lifelong resident of Kearney. He was very active in the community and enjoyed seeing the city grow. Larry was a practicing attorney in Kearney and recently slowed down his practice and became of counsel at the Tye & Rowling Law Firm. Larry practiced in Kearney for 40 plus years with the majority of time with the law firm of Butler, Voigt & Stewart. He was a member of the Buffalo County Bar Association serving as president from 1989 to 1990, the Nebraska State Bar Association, and a member of the Nebraska State Bar Association Member Dues Grievance Committee. He also previously served on the House of Delegates for the 9th Judicial District and was a former member of the Committee on Inquiry for the Supreme Court of Nebraska 6th District. Larry was involved with numerous organizations across Kearney. He attended Sertoma regularly. He served on many different boards of directors for the last thirty plus years for Good Samaritan Health Systems and Catholic Health Initiative (CHI). He previously served on the Boards of Directors for Good Samaritan Health Systems, CHI-Nebraska, Richard H. Young Hospital, Buffalo County Community Health Partners, and Sentinel Health Care. Larry has also been involved in the Kearney baseball scene previously serving on the board of directors for Kearney Little League and the Kearney Knights Legion Baseball Program. Larry was also involved with the Buffalo County Agricultural Association for 40 years. Most recent, Larry was serving on the CHI Health Regional Board of Directors, the Kearney Catholic High School Foundation Board of Directors, Town & Country Bank Board of Directors, Five Points Bank Board of Directors, the University of Nebraska at Kearney University Village Development Corporation, the Community Redevelopment Authority of the City of Kearney and the Merryman Performing Arts Center Board of Directors. Larry enjoyed spending time with his family. He was an early riser and loved making breakfast for his family when everyone was back home. He also loved to play cards and five-point pitch was a regular game he and his family would play. Larry was great in the kitchen and was always finding new recipes to try. Larry helped people. He helped his clients, he helped his friends and he helped his family. Surviving relatives include his wife, Barbara of Kearney; sons, Andrew of Grand Island and Robert of Kearney; sisters, Barbara Bly of Arkansas, Linda (Delbert) Gooder of Kearney. Sister-in-law, Carol (John) Knorr of Hickman, Nebraska. The beloved pets in his life Lola and Hamilton. As well as nieces, nephews, extended family and friends. Larry was preceded in death by his parents; parents-in-law, Ray and Sarah Falconer; nephew, Jimmy Carrico. Larry is a special person and will be missed.

The family of Larry E. Butler created this Life Tributes page to make it easy to share your memories.

Send flowers to the Butler family.