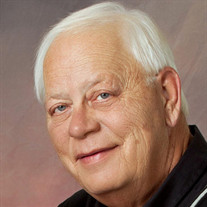 Laurence L. “Larry” Jepson, 77, of Kearney died Wednesday, January 9, 2019 at his home. Larry was born January 14, 1941 in Ashtabula, OH to Gilbert C. and Janet (Laird) Jepson. He grew up in Ashtabula and graduated from Ashtabula High School in 1958. He attended Furman University in Greenville, SC. on a football scholarship. He graduated with a business administration degree in 1962. He was drafted by the San Francisco Forty Niners (NFL) and the Denver Broncos (AFL). After spending time in San Francisco, Larry began his banking career back in Ashtabula. He was also a graduate of the Ohio School of Banking at Ohio University in Athens, OH in 1965, and the School of Banking of the South at L.S.U. University in Baton Rouge, LA in 1974. On December 23, 1961 he married Priscilla Swanson in Ashtabula, OH. The couple lived in San Francisco, Ashtabula, Greenville, Grand Island, NE and Kearney, NE during their 57-year marriage. They had two children, Mark Douglas and Jill Elizabeth - both of whom made him happy and proud. He moved to Grand Island, NE where he joined Overland National Bank in 1976. Overland National Bank later became part of First Commerce Bancshares Inc. In 1980, Larry was promoted by First Commerce Bancshares and moved to Kearney to serve as President and C.E.O. of First National Bank and Trust of Kearney, which later became Wells Fargo Bank. He retired from Wells Fargo in 2004, and later returned to banking part time as Vice Chairman of the Board at Kearney State Bank until 2008. Larry was a member of First Lutheran Church in Kearney. He has served as a Nebraska Diplomat Ambassador, on UNK Chancellors Council, and as board member and past chairman of the Kearney Area Chamber of Commerce. He was a member of Robert Morris Associates, Good Samaritan Health Systems board and past chairman, Ron and Carol Cope Foundation board, and UNK Advisory Council for College of Business and Technology. He participated and served in Rotary Club, Fraternal Order of Eagles, Kiwanis Club, NE Banker’s Association, Ducks Unlimited, Elks Lodge, Kearney Community Housing Action Committee and the Cosmopolitan Club. Larry was listed in Who’s Who of American Business Leaders. Growing up in Ohio, Larry was an avid baseball, basketball and football player who received many honors. In 2007, he was recognized as an inductee in the Ashtabula County Touchdown Club’s Hall of Fame. He continued his love of sports throughout his life. Larry enjoyed boating and fishing at Harlan County Reservoir and taking trips with friends and family to Maynard Lake in Ontario, Canada. Surviving relatives include his wife Cilla of Kearney; son Mark Jepson and wife JoAnn of Omaha; daughter Jill Benhart and husband Darrin of Davidson, NC; grandchildren, Beth Hall and husband Dave, Ashlynn Turner and husband Matt, Stacy Mehaffy, Zachary Jepson and wife Sarah, Alexa and Avery Benhart; great grandchildren, Audriana Hall, Cambrie Prososki, Mason Turner, Isaac Hall, Landon Turner and Amelia Jepson; brothers, Calvin Jepson and wife Toni of Cottonwood CA, Gilbert Jepson and wife Jane of Warren, OH, Norman Jepson and wife Mary of Ashtabula, OH, and sister Jennifer Painter and husband Dana of Powell, OH. He was preceded in death by his parents and his brother Dennis. Visitation with the family present will be Friday, January 18, 2019 from 5:00 – 7:00 p.m. at Horner Lieske McBride & Kuhl Funeral Home in Kearney. Private family funeral services will be held Saturday and entombment will be in the Mausoleum at Kearney Cemetery. Memorials are suggested to Furman Paladin Club, 3300 Poinsett Highway, Furman University, Greenville, SC 29613, the Leukemia and Lymphoma Society, or the Kearney Area Community Foundation. Please visit www.hlmkfuneral.com to leave a tribute or message of condolence.

The family of Laurence "Larry" L. Jepson created this Life Tributes page to make it easy to share your memories.

Send flowers to the Jepson family.