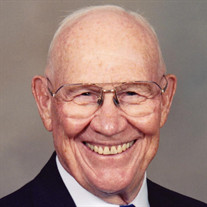 Dr. Lawrence William Bauer, Sr., 102, of Kearney, passed away Sunday, April 7, 2019 at his home. Funeral Services will be Monday, April 15, 2019 at 10:30 a.m. at Evangelical Free Church in Kearney. Rev. Brian Klein and Marshall Bauer will officiate. Burial will be at 2:30 p.m. at the Bartley, Nebraska Cemetery with Military honors provided by the Offutt Air Base Military Honor’s Team. Visitation is planned Sunday from 4:00 – 6:00 p.m. at Horner-Lieske-McBride & Kuhl Funeral and Cremation Services in Kearney or prior to services at the church. Memorials are suggested to Gideon’s International, Kearney Evangelical Free Church or Mother Hull Home. Online condolences may be submitted by visiting www.hlmkfuneral.com Horner Lieske McBride & Kuhl Funeral and Cremation Services in Kearney are in charge of the arrangements. Dr. Lawrence William Bauer was born October 11, 1916 in Southern Frontier County, six miles north of Bartley, NE in a farm home. He was born to Karl Bauer and Della Mae (Hart) Bauer. He grew up on a farm in Southern Frontier County. His first eight grades were in a one room school house - District 24. He was a graduate of Bartley, Nebraska High School. He joined the U.S. Navy in October 1941 and served in the South Pacific during World War II. He was honorably discharged in October 1945. He was a graduate of Taylor University in Upland, Indiana. He was a graduate from the University of Nebraska, College of Medicine and served a rotating Internship at Bishop Clarkson Memorial Hospital in Omaha, Nebraska. He married Mary Doolittle of Des Moines, Iowa on October 30, 1953, and to this union were born four children: Lawrence William (Bill) Bauer Jr. of Kearney, Nebraska; Barbara Ann Stoltz of Lincoln, Nebraska; James Edward Bauer of Redding, California; and Charles Andrew Bauer of Kearney, Nebraska. He surrendered his heart to Christ at an early age and joined the Garfield Evangelical Church in Frontier County. At the time of his death he was a member of Kearney Evangelical Free Church. He practiced medicine at the Kearney Clinic for 35 years. After retiring from Kearney Clinic, he continued to practice medicine doing Locum Tenens in various clinics and hospitals in south central Nebraska until he was forced to retire at the age of 85 because of failing vision due to macular degeneration. He was active in Boy Scouts of America. He was always interested in missions and was active in Wycliffe Associates, and was a member of Gideon's, International. He was a member of Veteran of Foreign Wars and was always proud of having served his country during World War II. He is survived by his son, Lawrence (Bill) Jr. and wife Jeanette, of Kearney, Nebraska; daughter Barbara and husband David Stoltz of Lincoln, Nebraska; son, James and wife Rhonda of Redding, California; and son, Charles and wife Kristen Bauer of Kearney, Nebraska. He is also survived by one brother Truman and wife Vonda Bauer of Wichita, Kansas; 14 grandchildren and 17 great grandchildren & a host of nieces & nephews. He was preceded in death by his wife of 64 years, Mary; both parents; and 12 sisters and 3 brothers: Leta Klinkebiel, Cambridge, NE; Ruth Swanson, McCook, NE; Esther Hansen, Holdrege, NE; Alice Koch, McCook, NE; Dorothy Harder, Canby OR; Harold Bauer, Canby, OR; Elsie Kasten Central City, NE; Grace Kutz, Eugene, OR; Gladys Cotton, Bartley, NE; Carl Bauer, Stromsberg, NE; Olive Bauer, Cambridge, NE; Mabel Bauer, Cambridge, NE; Corrine Lohr, Eugene, OR; Gertrude Hoffman, Lake Havasu, AZ; and Kenneth Bauer of Cambridge, NE

The family of Dr. Lawrence W. Bauer Sr. created this Life Tributes page to make it easy to share your memories.

Send flowers to the Bauer family.