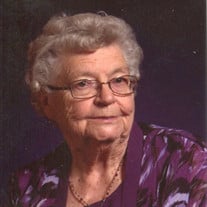 Leila V. May, age 88, of Kearney, passed away Wednesday, October 14, 2020 at Kearney Regional Medical Center. Funeral services will be on Wednesday, October 21, 2020 at 10:30 a.m. at the First United Methodist Church in Kearney. Pastors Kayla Mangrich and Alan Davis will officiate and burial will be at Prairie Center Cemetery at Haven’s Chapel. Visitation will be on Tuesday, October 20, 2020 from 5:00 p.m. – 7:00 p.m. at Horner Lieske McBride & Kuhl Funeral Home and also 1 hour prior to services at the church on Wednesday. The funeral service will be live streamed and can be viewed from the church website, www.kearneyfirstumc.org. Masks are requested at both the funeral and visitation. Memorials are suggested to Haven’s Chapel Methodist Church or First United Methodist Church in Kearney. Please visit www.hlmkfuneral.com to leave a tribute or condolence. Horner Lieske McBride & Kuhl Funeral and Cremation Services in Kearney is in charge of arrangements. Leila was born June 26, 1932 on a farm south of Berwyn NE, the daughter of Rolland Roy and Caroline Albertina (Peterson) Rhodes. She grew up in many different areas of Custer and Valley County. She attended high school in Ord and Mason City where she graduated in 1950. She had studied normal training and taught school right out of high school at District 55 in Buffalo County. She attended 2 years of College at Kearney State Teachers College. She also taught at district 24 for one year before returning to District 55. On June 19 of 1955 she married her best friend, Harold LeRoy May at the Methodist Church in Riverdale. They made their home in rural Buffalo County before buying a farm in Divide Township where they currently resided. She only taught one more year after being married and then became a full time homemaker. To this union were born two daughters and the third came as a ten year old on Leila’s birthday. She worked part time at Coast to Coast Store and served in the Divide Township election board for many years. Leila was an active member of the United Methodist Church at Havens Chapel where she taught VBS, Youth Group, Sunday School, and was also an active member of the United Methodist Women. She served as an Officer of the UMW for the Central District for many years. She really enjoyed her years of volunteering at the Good Samaritan Hospital Surgery Lounge for more than 25 years. She was also active in the 4-H program and was a co-leader to her daughters club. Leila loved her flowers, especially roses. She has a large rose garden and when she was able, she loved to share them with others. Once her health no longer permitted her to volunteer she began what we call her phone ministry. She called many people in her church family to pray and encourage them. Her family was very important to her. She cared for her grandchildren while their mother worked. Survivors include her husband, Harold, of Kearney; brother, Richard (Lois) of Palm Coast, FL; daughters, Patricia May of Plymouth, NE, Shirley May of rural Kearney and Diana (Jeff) Petr of Riverdale; Three grandchildren, Jessie (Mike) Wolf of Lincoln, Jacob Petr of Plainfileld, IL and Jared Petr (fiancé- Rachel Shadley) of Lincoln; two great grandchildren, Jaxon McMullen and Gage Wolf both of Lincoln; Other survivors include; uncle, Marvin Rhodes of Lincoln; Aunt, Marcella Welch of Rockville MD; Harold’s siblings, Phyllis Roker, Bill and Sue May, Dorothy Miller, John and Evelyn May; many nieces and nephews. She was preceded in death by her parents; brother, Russell and wife Deanna Rhodes; Sister-in –law, Helen (Wayne) Steinmeyer; brother –in-laws, Dick Roker and Donald Miller

The family of Leila V. May created this Life Tributes page to make it easy to share your memories.

Leila V. May, age 88, of Kearney, passed away Wednesday, October...

Send flowers to the May family.