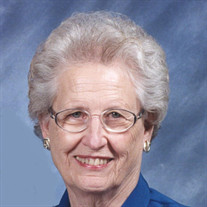 Lorna L. Hartmann, 93, of Kenesaw, passed away at her home, April 10, 2022. Funeral services will be 11:00 a.m., Thursday, April 14, 2022 at St. Paul Lutheran Church in Lowell, Nebraska, with Pastor Paul Duffy officiating. Burial will follow at 2:00 p.m. at the Kearney Cemetery. Visitation will be from 5:00 p.m. to 7:00 p.m., Wednesday, April 13, 2022 at Horner Lieske McBride & Kuhl Funeral Home. Memorials are suggested to St. Paul Lutheran Church. Please visit www.hlmkfuneral.com to leave a tribute or message of condolence. Horner Lieske McBride & Kuhl Funeral and Cremation Services of Kearney are in charge of arrangements. Lorna was born October 16, 1928 at the family home near Kenesaw to Henry and Ella (Nolte) Stade. She was raised on the family homestead and attended country school until the 8th grade. She then attended Kearney High School and graduated in 1946. On September 7, 1950 she married her lifelong partner, Lorin ‘Butch’ Hartmann in Lowell, Nebraska. To this union they were blessed with two children, Mark and Marla. In 1952 they moved to the Stade Homestead where they farmed and raised their children. They enjoyed their winter travels to Texas where they met several friends over the years. Lorna was a member of the St. Paul Lutheran Church where she was the organist for 70 years and on the election board. Lorna enjoyed spending time with family, researching genealogy and writing. She loved life on the farm and being able to be alongside her husband. Lorna is survived by her husband of 72 years, Lorin of Kenesaw, Nebraska; children Mark Hartmann and wife Kathrine (Isaac) of Shelton, Nebraska and Marla Hartmann of Kearney; granddaughters Tara (Griffin) Nietfeld and husband Eric of Gibbon, Nebraska and Nesha (Griffin) Danielson and husband Corey of Minden, Nebraska; great-grandchildren Alaysa and Addisyn Griffin of Gibbon, Nebraska and Branden and Emma Danielson of Minden, Nebraska; brothers-in-law Art Hartmann and wife Helen of Gibbon and Al Hartmann and wife Karen of Lowell, Nebraska; along with several nieces and nephews. Lorna was preceded in death by her parents; sister Una (Stade) Anderson; brothers-in-law Harland Hartmann and Norman Hartmann and a sister-in-law Ester Lee.

The family of Lorna L. Hartmann created this Life Tributes page to make it easy to share your memories.

Send flowers to the Hartmann family.