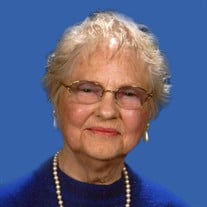 Marcia L. Trimble, 94, of Kearney, Nebraska, passed away Monday, November 9, 2020 at Kearney Regional Medical Center. Funeral services will be 10:00 am, November 18, at the First United Methodist Church in Kearney with Pastor Melody Adams officiating. Burial will be 2:30 p.m. at Lincoln Memorial Park Cemetery in Lincoln, Nebraska. The funeral will be livestreamed at www.kearneyfirstumc.org Visitation will be from 5:00 to 7:00 pm, November 17, 2020 at Horner Lieske McBride & Kuhl Funeral Chapel and one hour prior to the service at the church. Memorials are suggested to the family to be designated later. Masks are requested for those attending any of the services and social distancing guidelines will be followed. Marcia was born October 18, 1926 to Elton and Marjorie (Black) Tyner in Ridgeway, Missouri. She grew up in Ainsworth, Liberty, and Lincoln, Nebraska graduating from Lincoln High School in 1944. Marcia married Bill Wortman in Lincoln in 1947 and they later divorced. Marcia then married George Hassing June 1, 1979 in Kearney. He passed away in 1993. Marcia married Robert Trimble on August 18, 1996 in Kearney. He passed away in 2013. Marcia earned her bachelor’s degree from Kearney State College. She began teaching at Kearney Public Schools in 1966 and taught for 27 years retiring in 1993. Marcia was a member of First United Methodist Church, American Association of University Women, League of Women Voters, Kearney Women’s Club, M.O.N.A., Alpha Xi Delta, Kearney Education Association, Nebraska Education Association, National Education Association, AARP, Mother Hull Home Board, Red Cross, P.E.O., and Golden K Kiwanis. Marcia is survived by her daughter Cindy and Ron Reher of Humboldt, IA; granddaughter, Tina and Tim Clarken of Badger, Iowa, their children, Cooper and Gavin Clarken; grandson, Brent Reher of Humboldt, IA and his children Montgomery and Dakota Reher. Marcia was preceded in death by her parents, brother Stan Tyner, and two husbands.

The family of Marcia L. Trimble created this Life Tributes page to make it easy to share your memories.

Send flowers to the Trimble family.