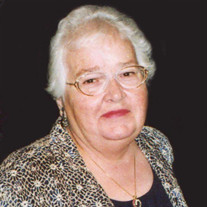 Margene Rose, age 80, of Gibbon, passed away Sunday, March 7, 2021 at her home. Funeral services will be held 2:00 p.m., March 12, 2021 at the Gibbon Faith United Methodist Church with Pastor Michael Evans officiating. Burial will follow the service at Prairie Center Cemetery at Havens Chapel. Visitation will be from 5:00 to 7:00 pm, March 11, 2021 at the Horner Lieske McBride & Kuhl Funeral Home and one hour prior to the service Friday at the church. Memorials are suggested to Faith United Methodist Church in Gibbon to be given to the Vacation Bible School and/or the Sunday School program or the Trails and Rails Museum in Kearney. Margene Myers was born August 16, 1940 in Gibbon to George and Ellen (Osborne) Myers. She was the 2nd, having 1 older brother George and younger brother Roger. They grew up on a farm north of Gibbon and then moved into Gibbon when Marge was 8. Marge graduated from Gibbon High School in 1958. She attended the Kearney Teachers College from 1958-1960. She earned her degree and taught elementary students at 7 East and 7 West in Grand Island. She was the Superintendent of these two schools and then taught at Stolley Park in Grand Island. She met Richard Rose because his brother Henry's wife was a friend and neighbor of Marge. They were married August 15, 1959. To this union were born two sons, Dave and Doug. Besides teaching Marge also worked at the Gibbon turkey plant. She worked there in high school and later years served many employees their meals. Once Doug and Dave were in high school and moving onto college, she started a day care. She loved the little children and made them part of their family, taking them on camping trips and still remembering their favorite meals. Upon retiring from childcare, her and Richard moved to Johnson's Lake. They lived there for 4 years and then returned to Gibbon. She will be remembered for her ability to see the goodness and humor in almost in situation. Many of her relatives and friends have afghans and quilts made by her talented hands. She thoroughly enjoyed her craft club in Gibbon and many of her relatives and friends will miss their projects. She was also an active member of the Faith United Methodist Church in Gibbon and the women's group there. She was proud to be a member of DAR the Daughters of the American Revolution and the Fraternal Order of Rebekah. Many of her memories are of camping with Richard, the children and friends and relatives. She saw much of the country from one of their 3 campers. They were in the Gibbon Campers group. Survivors include her spouse, Richard Rose, her son Dave with his wife Cathy and two children Matthew and Sophia. Her son Doug is married to Julie and have four children Dillon Rose and his wife Breanna, Carter Rose, Ally Wagner and Adam Wagner. The grandchildren meant the world to Marge. She loved all of her children, family, and friends unconditionally. She had a lifelong love of 61 years of marriage with Richard. She was preceded in death by her parents, two brothers, two brothers-in-law Paul and Henry, and sister-in-law Kathryn.

The family of Margene K. Rose created this Life Tributes page to make it easy to share your memories.

Send flowers to the Rose family.