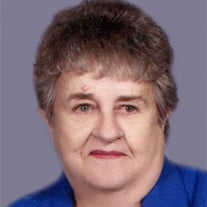 Mary C. Altmaier, 82, Kearney, died peacefully surrounded by her family Monday, January 14, 2019 at Mt. Carmel Home and Rehabilitation Center. Mass of Christian Burial will be 2:00 p.m., January 17, 2019 at St. James Catholic Church with Fr. Art Faesser officiating. Burial will follow the service at Kearney Cemetery. Visitation will be from 5:00 to 7:00 p.m., January 16, 2019 at Horner Lieske McBride & Kuhl Funeral and Cremation Services and one hour prior to the service Thursday at the church. Memorials are suggested to St. James Catholic Church or Mt. Carmel Home and Rehabilitation Center. Mary was born December 25, 1936 in Kearney to Alfred and Verna (Schmidt) Just. She grew up in the area and graduated from Kearney High School in 1954. On June 2, 1954 Mary married Richard C. “Dick” Altmaier in Kearney. They lived on a farm north of Kearney. She worked as a bookkeeper until they began having children. Mary was an active member of St. James Catholic Church. She also was a 4-H Leader, a member of the Thorn-Div Extension Club, and T.O.P.S. Mary was a good cook, loved to garden, and enjoyed playing cards. She was an avid Husker and Denver Bronco Football fan. Mary is survived by her sons, Steve and wife Amy Altmaier of Kearney, David and wife Judy Altmaier of Kearney; daughters, Karen and husband Doug Bell of Bradshaw, NE, Julie and husband Scott Trampe of Riverdale, NE, Lisa and husband Dale Nielson of Chapman, NE, Geralyn Ostrander of Longmont, CO; brother Bob and wife Judy Just of Funk, NE; 13 grandchildren and 8 great grandchildren. Mary was preceded in death by her husband, sister Janet Altmaier, and brother Jim Just.

The family of Mary C. Altmaier created this Life Tributes page to make it easy to share your memories.

Send flowers to the Altmaier family.