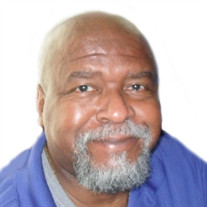 Michial “Mike” A. Templeton, Sr., age 66, of Kearney, passed away Monday, September 28, 2020 at CHI Health - Good Samaritan Hospital in Kearney. Memorial services will be held 10:30 am, October 9, 2020 at St. James Catholic Church with Fr. Joseph Hannappel officiating. Masks are required for those attending the service. Military Rites will be provided at the church by the Nebraska National Guard Funeral Honors Team, Kearney American Legion Post #52, and Kearney V.F.W. Post #759. Memorials are suggested to the Central Nebraska Veterans Home in Kearney. Michial was born December 28, 1953 in Kansas City, Kansas to Alexander and Ella (Hudson) Templeton. He graduated from Sumner High school in Kansas City in 1971. At Sumner, Michial was an active participant in sports and distinguished himself in the classroom. Upon graduation Michial was accepted at the Kansas University in the fall of 1971 where he continued to play football. Michial was drafted into the Army in 1971 and served until the end of the Vietnam War. He chose to make the Army his career and served in Korea, Panama, Germany, Japan and various stateside assignments. He was awarded three Silver and two Bronze Stars during his military career. Michial left active duty in 1991 and earned Master’s degrees in Special Education with emphasis in Autism and Education and Literacy. These degrees lead to teaching assignments with the Department of Defense Dependents’ Schools in Turkey, Belgium and Germany. Michial’s interest in new experiences and cultures would lead him to teach in Kuwait, -the United Kingdom and the Philippines. Michial thrived on adventure and learning about the world. He was a lifelong learner that wanted to inspire students to pursue their dreams. Michial believed education could only enhance one’s life. On July 31, 2007 Michial married Janice Martin in Salisbury, Maryland. They returned to Europe until retirement in June 2020. Kearney, Nebraska would be their home until Michial’s passing on September 28, 2020. When not in the classroom Michial loved golf, travel, scuba diving, sky diving, watching his beloved Kansas City Chiefs and any youth sports. Michial is survived by his wife Janice of Kearney; son, Michial & Courtney Templeton II of Kearney; daughter Kristina Templeton of Washington; grandson, Michial Templeton III; granddaughter, Nola Templeton; brothers, Melvin Templeton of Des Moines, Iowa and Walker Templeton of Kansas City, Kansas; sisters, Virginia Middleton of Kansas City, Kansas, and Ella & Robert Cowherd of Des Moines, IA. A multitude of nieces and nephews and friends worldwide also mourn his passing. Michial was preceded in death by his parents and two sisters, Albertine Norris and Charletta Templeton.

The family of Michial A. "Mike" Templeton created this Life Tributes page to make it easy to share your memories.

Send flowers to the Templeton family.