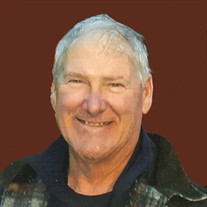 Monte Ray Eckhoff, age 62, of Kearney, passed away Saturday, June 29, 2019 at his home. Memorial services will be 10:00 a.m., Monday, July 8, 2019, at Horner Lieske McBride & Kuhl Funeral Home with Pastor John Gosswein officiating. Inurnment will be at a later date at the Riverview Cemetery near Sutherland. There will be no visitation. Memorials are suggested to the family to be designated later. Please visit www.hlmkfuneral.com to leave a tribute or message of condolence. Horner Lieske McBride & Kuhl Funeral and Cremation Services in Kearney is in charge of arrangements. Monte was born September 16, 1956 in Sutherland to Robert and Rosellee (Riegler) Eckhoff. His father was a welder and the family moved around quite a lot when he was growing up, so he attended school in Glenville, Hastings, Broken Bow, Ainsworth, and Albion. He graduated with the Class of 1975 from Albion. Following graduation, he worked at a glass company in Lincoln and at the Phelps Memorial Health Center in Holdrege. For the last 30 years, he worked driving a cement truck for Kearney Concrete. He loved cars, music, going to concerts, fishing, camping, and his candy bars. He will be greatly missed by all who knew him. Survivors include his companion for the last ten years, Cheryl Miller of Kearney; a sister, Dixie and husband Craig Hill of Omaha; three nephews, Blaine and wife Jessica Bader, Ty and wife Jaci Bader, and Derek Hill all of Omaha; seven great nieces and nephews, Olivia Bader, Sheldon Bader, Sophia Bader, Landon Bader, Maya Bader, Alain Hill and Lennox Hill all of Omaha; an uncle Melvin Eckhoff of Sutherland; cousins Randy and wife Brenda Eckhoff of Sutherland, Dustin and wife Randi Eckhoff of Sutherland, and Melissa (Nick) Eckhoff of North Platte. He was preceded in death by his parents.

The family of Monte R. Eckhoff created this Life Tributes page to make it easy to share your memories.

Send flowers to the Eckhoff family.