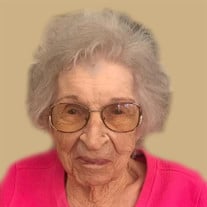 Nelva Glennece (Walker) Austin passed away November 15, 2019 at the Central Nebraska Veterans’ Home in Kearney at the age of 97. Nelva’s wishes were to be cremated and buried next to Stan and Gaylen in Moulton Cemetery in Loup County, Nebraska. A graveside burial service will be held at a later date. Nelva was born in Blue Springs, Nebraska September 16, 1922. She attended school there for a few years before her family moved to a farm in the Kent area between Burwell and Taylor in Loup County. On May 31, 1941 she married Stanley (Stan) Austin of Burwell in Loup City, Nebraska. Stan enlisted in the Army Air Corps after the attack on Pearl Harbor. His B-17 was shot down over Italy on October 5, 1943 and Nelva was left to care for two very small boys, both under two, in a small house in Taylor. Stan evaded the Germans in Italy for two months before being captured. He spent 15 months as a POW in Stalag 17 near Vienna, Austria. He was repatriated in 1945 and returned to Burwell where he and Nelva made their home. Nelva worked as a telephone operator, then worked in Dr. Roy Cram’s office for many years until they left Burwell. Although she was born and died in Nebraska, she spent 37 years of her adult life in California. In 1957 Nelva, Stan, Gary and Gaylen moved to a sheep and barley ranch in northern California. Gary and Gaylen spent one school year in California, then they returned to Nebraska where they lived with their grandparents, Roy and Annie Austin, in Burwell until they finished high school. Nelva worked for a doctor in Orland, California until she retired. She and Stan loved to fish and hunt for rocks when they got the chance. They enjoyed the numerous fruit trees on their one acre, as did their kids and grandkids. They loved when the grandkids came to visit. Stan passed away in 1985 in Chico, California. Nelva remained in California until 1994 when she returned to Burwell. She moved into the Roy and Annie Austin house where she lived until her health declined in 2015 and she could no longer care for herself. Her granddaughter, Kristi, and husband Gene Svec, took her into their home in Kearney and cared for her for 3½ months. After that she moved to assisted living and a long term care facility before being accepted into the Veterans’ Home in October 2019. She is survived by one son, Gary and wife Kathy, of Omaha; granddaughter and husband, Kristi and Gene Svec, of Kearney and their children Nate, Jake, Jordan, Izzy and Converse; grandson and wife, Brian and Jodie Austin, of Elkhorn and their children Emily and Brody; daughter-in-law, Jan Austin, of Burwell; sister-in-law, Sharon Walker, of Colorado Springs; and seven nieces and nephews. Nelva was preceded in death by her husband, Stan; her parents, Glen and Grace Walker, of Colorado Springs; Stan’s parents, Roy and Annie Austin, of Burwell; brother Gerald (Bud) Walker and wife Norma Lee, of Colorado Springs; sister Phyllis Hyde and husband Dallas, of Willows, California; sister Beverly Rowse and husband Everett, of Burwell; brother Glen Walker, Jr, of Colorado Springs; and son Gaylen, of Burwell. Memorials may be directed to the Central Nebraska Veterans’ Home or AseraCare Hospice.

Nelva Glennece (Walker) Austin passed away November 15, 2019 at the Central Nebraska Veterans&#8217; Home in Kearney at the age of 97. Nelva&#8217;s wishes were to be cremated and buried next to Stan and Gaylen in Moulton Cemetery in Loup... View Obituary & Service Information

The family of Nelva G. Austin created this Life Tributes page to make it easy to share your memories.

Send flowers to the Austin family.