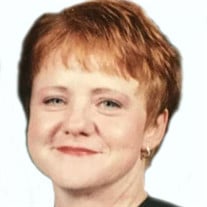 Nila G. Bachkora, 63 of Kearney, died Monday, February 3, 2020 at CHI Health – Good Samaritan Hospital in Kearney. Memorial Services for Nila have been postponed and will be re-scheduled at a later date. Memorials are suggested to St. Jude Childrens Research Hospital, Care of the family. Please visit www.hlmkfuneral.com to leave a tribute or message of condolence. Horner Lieske McBride and Kuhl Funeral and Cremation Services are in charge of arrangements. Nila was born on October 29, 1956 in St. Joseph, MO to Leslie H. and Doris M. (Latham) Pinkham. She attended school in Kearney and graduated from Kearney High School in 1975. She would then attend and graduate from Queen Ann’s Beauty School in Kearney. She married Marty Bachkora on July 31, 1975 in Kearney. Nila became a business owner in Kearney in the 80’s starting, owning and operating New Impressions Hair Salon on west 11th. She loved the creative nature of the profession but was forced to give it up due to health concerns. After selling her shop, she and her husband lived in the Memphis, TN vicinity for nearly 20 years during which time their only daughter, Paige, was born. She loved all of her nephews and nieces as her own, even after Paige’s birth they still held a special place in her heart. Nila embraced and lived every facet of life with her family in mind, it was her absolute focus. Surviving relatives include her husband, Marty of Kearney; daughter, Paige Bachkora of Kearney; granddaughter, Blakeley Bachkora Shultz of Kearney; brothers, Joe Pinkham of Lexington, SC and Charles Pinkham of Grand Island, NE; sisters, Leslie Weber of Arizona and Ronda and her husband Ken Stines of Kansas City, MO; nephew, Keddrin Weber of Singapore; numerous other nieces, nephews and other extended family. Nila was preceded in death by her parents;

Nila G. Bachkora, 63 of Kearney, died Monday, February 3, 2020 at CHI Health &#8211; Good Samaritan Hospital in Kearney. Memorial Services for Nila have been postponed and will be re-scheduled at a later date. Memorials are suggested to St.... View Obituary & Service Information

The family of Nila G. Bachkora created this Life Tributes page to make it easy to share your memories.

Send flowers to the Bachkora family.