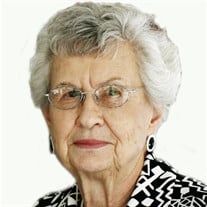 Norma M. Weber, 85, of Kearney died Sunday, September 15, 2019 at Mt. Carmel Home and Rehabilitation Center in Kearney. Memorial services will be Friday, September 20, 2019 at 2:00 p.m. at the First Lutheran Church in Kearney. Rev. Dr.’s Rick Carlson and Michelle Holley Carlson will officiate. Entombment of ashes will be in the church columbarium. There will be no visitation. Memorials are suggested to First Lutheran Church. Please visit www.hlmkfuneral.com to leave a tribute or condolence. Horner Lieske McBride & Kuhl Funeral and Cremation Services in Kearney is in charge of arrangements. Norma was born July 9, 1934 to Erwin and Martha (Mueller) Burger at their home near DeWitt, NE. She graduated from DeWitt High School in 1951. She took Normal Training while in High School and after graduation taught grades 1-8 at Prairie Star School District #5 near her home. She attended Kearney State Teachers College for 2 years, then attended and received a BS in Education from the University of Nebraska at Lincoln in 1958. On September 1, 1957 she married Carl Weber at Trinity Lutheran Church in DeWitt. She and her husband lived in Lincoln while they finished school, then returned to Kearney, where they worked, raised their family, engaged in community activities, and eventually retired. They were living at Brookdale Northridge upon Norma’s passing. Norma held several jobs outside of her home, i.e., the American Red Cross and Buffalo County Election Commissioner’s office, but her true focus was working as a homemaker, parent, and wife. She and Carl raised three children – Craig, Ann, and Mark – and they rarely missed a sporting event, music program, or any other activity the kids (or grandkids) participated in. Norma’s devotion to her family carried over to her community as well. She volunteered for many years and for many different organizations, some of which included delivering Meals on Wheels, reading the Kearney Hub to the visually impaired, driving cancer patients to medical appointments, and cleaning house and making meals for neighbors in need. She also spent many years working in the Sure Cure Gift Shop at Good Samaritan Hospital. She was an active member of First Lutheran Church in Kearney and was a long-time member of P.E.O. Chapter GG. Through these organizations, and others, Norma developed many deep and lasting friendships. She loved walking, talking, lunching and laughing with her friends, and whenever needed offered a sympathetic shoulder and words of encouragement. Surviving relatives include her husband Carl of Kearney and children and spouses: Craig and Nancy Weber of Kearney, Ann and Sid Moore of Phoenix, AZ, and Mark and Stephanie Weber of Dawson, MN. Grandchildren include Alicia Harrison, Marissa Harrison, Sam (and Bailey) Weber; Dylan (and Janae) Moore, Jace (and Lindsay) Moore; Elle Weber, Esten Weber, Emma Weber, Eli Weber and Eden Weber; and great grandchildren Gavin Goble, Kai Moore and Greer Moore. She was preceded in death by 2 brothers, Allen and Robert Burger and sister, Marcene Renner.

The family of Norma M. Weber created this Life Tributes page to make it easy to share your memories.

Send flowers to the Weber family.