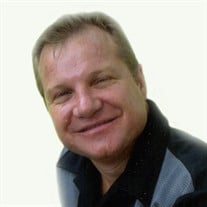 Randy Damratowski, 56, of Kearney, died Friday, January 18, 2019 at CHI Health Good Samaritan Hospital in Kearney. Memorial services will be 11:00 a.m., January 23, 2019 at Kearney E-Free Church with Pastor John Watson officiating. Private family burial will be at a later date. Memorials are suggested to the Experimental Aircraft Association (E.A.A. Chapter #1091) or the Alzheimer’s Association. Randy was born June 18, 1962 in Grand Island, Nebraska to Harold and Betty (Smedra) Damratowski. He graduated from wood River High School in 1980, and then Hastings Tech. Following school he started working Triad Fastener in Alda, Nebraska with Harold. In 1985, Randy married Donna Krecklow, and they later divorced. Randy stated Dyna-Tool in Grand Island in 1989. He later moved the company to Kearney in 1995. Randy married Barbara Braden on May 22, 2004 in Wood River. He has served on the Kearney Y.M.C.A. Board, coached his boys in Little League Baseball, and was a Scout Master. Randy enjoyed boating, water skiing, and hunting. Most of all he enjoyed building and flying model airplanes. He loved being around his family and children. Randy would do anything for his kids and the neighborhood kids. He was a “Big Kid” at heart. He was social and couldn’t go anywhere without knowing someone. Randy is survived by his wife Barb of Kearney; sons, Adam Shemat of Baileyville, ME, Aaron Shemat of Fairbury, NE, Aaron Damratowski and fiancée Arianna Harper of Kearney, Nathan Damratowski and partner Erica Johnson of Kalamazoo, MI, Mathew Damratowski and fiancée Mercadies Lieb of Kearney, Alex Shearer of Minden, NE; mother, Betty Damratowski of Omaha, NE; brother, Jeff Damratowski and wife Linda of Dannebrog, NE; sisters, Peggy Zurek of Omaha, NE Lorie Aegerter and husband Bret of Omaha, NE; grandchildren Kalli, Kyler, Ava, and Axl Shemat, Aria and Leo Shearer, Cora, Lillienne, Greyson, and Jaxtyn Damratowski. Randy is preceded in death by his father.

The family of Randy F. Damratowski created this Life Tributes page to make it easy to share your memories.

Send flowers to the Damratowski family.