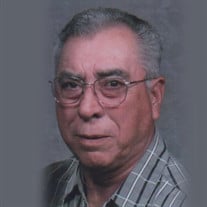 Raul O. Vasquez, age 77, of Kearney, passed away Wednesday, March 4, 2020 at CHI Health – Good Samaritan Hospital in Kearney. Mass of Christian Burial will be on Friday, March 13, 2020 at 10:30 a.m. at St. James Catholic Church in Kearney. Father Joe Hannappel will celebrate and burial will be at a later date. Visitation will be on Thursday, March 12, 2020 from 4:00 p.m. – 6:00 p.m. followed by a Christian wake service at 6:00 p.m. all at the church. Military honors will be provided following services by the Kearney American Legion Post #52, Kearney V.F.W. Post #759 and the Nebraska National Guard Funeral Honors Team. Memorials are suggested to the Vasquez Family to be designated at a later date. Please visit www.hlmkfuneral.com to leave a tribute, memory or condolence. Horner Lieske McBride & Kuhl Funeral and Cremation Services in Kearney is in charge of arrangements. Raul was born on February 27, 1943 in Pearsall, TX to Francisco and Isabel (Ortiz) Vasquez. Raúl met the love of his life, Gloria Patlan in high school. It was love at first sight. They married young, on December 13, 1959 in Elmhurst, IL and throughout their 60 years together they raised four children, ten grand-children and, ten great-grandchildren. If anyone came to visit Raúl, Gloria would say “he is out in the garage”. In the garage he worked on his favorite hobby, cars. Often his brothers, or one of the many nephews, nieces and eventually the grandchildren came to help him and to learn the trade. His knowledge of cars was amazing, he could take a car apart and put it back together. He spent Sundays at Kearney Dragway with his wife, his brothers, their wives and all the children in the family. Great adventures happened at Kearney Dragway. His love of racing was shared with his brothers and all the children in the family. He proudly served his country in United States Army. He and Gloria were very loyal to the Army and the military. Their love for the Armed Forces would be passed to his son and grandsons. He served the Kearney community for many years as a Sergeant in the Kearney Police Department. Raul was also a member of St. James Catholic Church in Kearney. Surviving relatives include his wife, Gloria Vasquez of Kearney; daughters, Nora and Daniel Lenz of Eagle, NE and Annelle and Dale Rowedder of Kearney; son, Roy Vasquez of Kearney; brothers, Frank and Patricia Vasquez of Kearney and Louie Vasquez of Papillion, NE; grandchildren and great grandchildren; Toni and Bart Willnerd of Dardene Prairie, MO and their children Brodi, Chase, Bell and Colin; Lane Hinn of Eagle, NE and his children Aalyiah and Elijah; Whitney Hinn of Omaha, NE; Uriah Lenz of Honolulu, HI; Indra Rowedder; Alaric Rowedder; Aubrey Vasquez; Joe Vasquez; Erica and Pedro Martinez and their children Carlos, Christian, Thalia and Adriana all of Kearney; Jonathon Vasquez and Jillian Komskis of Charlotte, NC; several nieces, nephews, cousins and other extended family and friends. Raúl was preceded in death by his parents; brothers, Gilbert, Robert, David, Gus, and Dean Vasquez; son, Nicholas Vasquez; nephews, Gerald and Gus jr. Vasquez; uncle, Domingo Ortiz

The family of Raul O. Vasquez created this Life Tributes page to make it easy to share your memories.

Send flowers to the Vasquez family.