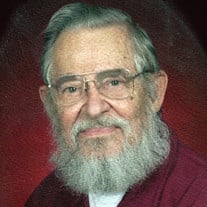 Richard Dale Cloyed, 89, of Kearney, Nebraska, passed away June 4, 2019, at home. He was surrounded by family and though his death was not unexpected, it was still a surprise. Services will be held at First United Methodist Church, 4500 Linden Drive, Kearney, on Friday, August 2, 2019 at ten thirty, Pastor Melody Adams, officiating. Interment at a later date. Arrangements were made by Horner Lieske McBride & Kuhl Funeral Home and Cremation Services and further information can be found on their website: www.hlmkfuneral.com Richard was a well beloved member of the Kearney community since moving here in 1961. He was employed by then Kearney State Teacher's College, now University of Nebraska at Kearney, from then until his retirement in 1994. Born to Lawrence N. and Dorothy L. (Snow) Cloyed of Blakesburg, Iowa, December 31, 1929, Dick grew up a farm boy in a close knit family of boys. He was a depression era child with cows and garden chores. His respite from this constant work was found in books. Words became his calling and his life. He joined the rank of teachers after long years of education: from Blakesburg to Burlington (Iowa) High School, graduating class of 1948, Burlington Junior College for an Associates degree in 1950, followed by the University of Iowa for a Bachelor of Arts, 1952, and Master of Arts, 1957, in English Literature. He was said to have the broadest reading background of anyone in the English department at KSC, where he taught for 33 years, with 20 years on the Rank and Tenure Committee, as well as most other departmental committees. Many of the British literature courses at UNK were originally introduced by Dick, and he is known to be the longest active sponsor of Sigma Tau Delta, the English Honorary Society, in the United States, as well as serving on its Board of Directors and as Treasurer for many years. He was faculty advisor for Carillon, the student writing publication. He was also instrumental in the inception of the Studies Abroad Program at KSC and served as its director for many years. He was a member of the National Educational Association, National Council of Teachers of English and American Legion Post #52. Richard married Juanita Bessie Van Osdol, also of Burlington, Iowa, on April 07, 1951, before he went to Korea as part of the United States Army from 1952-54. Following that service, he completed his masters as they began their family. Connie Lorene was born October 18, 1955, followed by Richard Allen on February 07, 1958 and Catherine Diane on August 28, 1960. Besides his teaching and fathering, Dick was an active contractor/carpenter adding garages, repairing roofs and siding, pouring driveways, sometimes even plumbing! He used to remind us that “if you could read, you could do anything” and proved it with his ability to pick up a new skill or perform a new task. He could understand and put into use what he read. He could inspire others to do the same. He spent many wonderful hours acting in the college theatre department, as well as helping create and build the Kearney Community Theatre, and supported them as a player as well as constructing many of their sets over many years. He enjoyed fishing, particularly alone, in a boat, on a lake, in Minnesota. But he'd let the rest of us come along once in awhile and share in his peace. Some of the happiest family memories took place during summer vacations there. Richard was active in a bowling league for years, and stood up at election time from 1996-2013 as precinct staff and, several of those years, as Precinct Captain. He served on many committees in his years with the First United Methodist Church. He and Juanita loved to travel and were able to enjoy Italy and Egypt, UK and France, Japan and Greece, Israel and Canada, as well as many wonderful places in the United States. They were also able to visit their children, and their families, who now survive Richard, including Connie Cloyed (Robert Heywood) of Oregon, Richard Cloyed (Julie) of Montana, Catherine Snow (William Gutierrez) of Nebraska, as well as grandchildren, Emily (Ryan) Alderaen, Hannah Aronowitz, David (Cari) Cloyed, Jonathan (Jessie) Cloyed, Sarah (Nic) Marshall, Juanita Snow, Tosh Gutierrez and eleven great grandchildren. He is also survived by sister-in-law Leota Cloyed of Florida, brother John (Ellen) Cloyed of Iowa as well as a passel of nieces and nephews. He is preceded in death by his parents, brothers Keith and Larry (Joann) Cloyed, brothers-in-law Forrest and Dean Van Osdol, as well as grandson Jade Gutierrez. Memorials are suggested to the family for later designation to the Sigma Tau Delta scholarship fund at UNK in Richard’s name.

Richard Dale Cloyed, 89, of Kearney, Nebraska, passed away June 4, 2019, at home. He was surrounded by family and though his death was not unexpected, it was still a surprise. Services will be held at First United Methodist Church, 4500 Linden... View Obituary & Service Information

The family of Richard D. Cloyed created this Life Tributes page to make it easy to share your memories.

Send flowers to the Cloyed family.