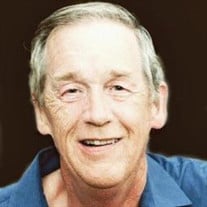 Richard “Rick” K. Rounsborg, 61, of Minden died peacefully Thursday, February 28, 2019 at CHI Bergan Mercy Hospital in Omaha. Surrounded by his beloved family. Funeral Mass will be Tuesday, March 5, 2019 at 10:30 a.m. at St. James Catholic Church in Kearney. Father Joe Hannappel will officiate. Visitation with the family present will be Monday from 6:00 – 8:00 p.m. at the Funeral Home. In lieu of flowers, the family is requesting that donations be made to the Gracie’s Promise organization, a cause for which he was an avid supporter. http://graciespromise.org/. Please visit www.hlmkfuneral.com to leave a tribute or message of condolence. Horner Lieske McBride and Kuhl Funeral and Cremation Services of Kearney is in charge of arrangements. He was born to Dr. Gerald and Barbara (Sullivan) Rounsborg on February 5, 1958 in Omaha, Nebraska. Rick graduated from Torrington, High School in Torrington, Wyoming in 1976 and received a BA in Finance from the University of Wyoming in 1980. He received a Master of Business degree from the University of Nebraska-Lincoln in 1985. He married Frances Petersen in 1984, and together they raised three children: Sophie, Maggie and Jack. Rick’s work in the corporate field moved the family to Topeka, Wichita, and Derby Kansas, and the family favorite, Houston Texas before moving back to Nebraska, settling in Kearney in 1999. Rick owned Med-Pro/Sand Hills Pharmaceutical Distributing in Lexington, Nebraska retiring in 2014. He was employed by Republic National Distributor until his death. Rick was active in the St. James Catholic community for many years as a confirmation leader, lector and Eucharistic minister. Rick enjoyed Husker football, summers spent boating at Lake McConaughy, and riding his Harley. His greatest love was spending time with his kids and his grandchildren. Rick is survived by his wife, Frances Petersen Rounsborg; three children, Sophie Fox (Clayton) of Leawood, Kansas, Maggie Rounsborg of Lincoln and Jack Rounsborg (fiancée Katie McKnight) of Des Moines, Iowa. He is also survived by his beloved grandchildren; Collins, Troy (with whom he proudly shared his birthday) and Noah Fox and Jaxon McKnight. He is also survived by his parents Dr. Gerald and Barbara Rounsborg of Ogallala; sister, Katherine Hall (Timothy) of Plattsmouth and brother William Rounsborg (Dana) of Aurora, Colorado as well as several aunts, uncles, cousins, nieces and nephews. He will be greatly missed by his family and countless friends. Rick never met a stranger, he made everyone he encountered feel welcome and loved. He leaves a legacy of kindness, loyalty and lasting friendship.

The family of Rick K. Rounsborg created this Life Tributes page to make it easy to share your memories.

Send flowers to the Rounsborg family.