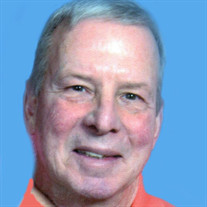 Robert G. “Bob” Furniss, 69, of Kearney, passed away Sunday, September 27, 2020 at his home. Memorial services will be on Wednesday, September 30, 2020 at 10:30 a.m. at St. James Catholic Church in Kearney. Father Art Faesser will celebrate. There will be no visitation. Burial with Military Rites provided by the Nebraska National Guard Funeral Honors Team, Kearney American Legion Post #52, and Kearney V.F.W. Post #759 will follow at the Kearney Cemetery. Masks are requested for those attending the service at the church. Memorials are suggested to the Alzheimer’s Association. Bob was born October 30, 1950 in Grand Island, Nebraska to Robert W. and Catherine (LeMasters) Furniss. He graduated from Ogallala High School and then continued his education at the University of Wyoming. Where he met his future wife. Bob married Carol Hanson on December 12, 1970 in Denver, Colorado. He worked for Western Electric and then AT&T in Denver. Bob entered the Army in April of 1971 and served during Vietnam until 1973. After the service they lived in Denver until moving to Stratton, Nebraska in 1996. Bob was employed by the Village of Stratton. Bob and Carol moved to Kearney in 2016. Bob enjoyed hunting, fishing, doing crossword puzzles, and was an avid reader of Vietnam history. Bob is survived by his wife Carol; daughter, Andrea and Neil Kemp; grandchildren, D.J. Kemp and Kinley Kemp all of Kearney; mother, Catherine Furniss of Kearney; sister, Cathy and Steve Miller of Santa Fe, NM; brother Gary Furniss of Burnsville, MN; brothers-in-law, Andy and Vicki Hanson of Kearney, Dan and Barb Hanson of Broken Bow, NE; sisters-in-law, Patti and Gary Nicholson of Beatrice, NE, Cindy and Scott Murphy of Kearney. Bob was preceded in death by his father, father and mother-in-law Roger and Yvonne Hanson, and sister-in-law Kathy Furniss.

The family of Robert G. "Bob" Furniss created this Life Tributes page to make it easy to share your memories.

Send flowers to the Furniss family.