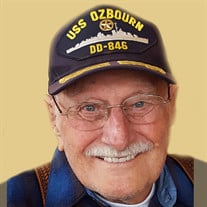 Rodney L. “Rod” Stewart, 90, Kearney, died Thursday, October 11, 2018 at his home. Memorial services will be held 11:00 a.m., October 16, 2018 at Horner Lieske McBride & Kuhl Funeral chapel with Pastor Dean Pofahl officiating. Military rites will be provided by the United States Naval Funeral Honors Team, Kearney American Legion Post #52, and the Kearney V.F.W. Post #759. In lieu of flowers memorials are suggested to family to be designated later. Rod was born August 8, 1928 to Melvin and Martha (Capron) Stewart in Albuquerque, New Mexico. He graduated from High School in Albuquerque. He enlisted in the Navy in 1951 and served during the Korean and Vietnam wars, retiring as a Captain in 1981. Rod Stewart was a multi-faceted man who loved life. He played as hard as he worked, cried as easily as he laughed. His great booming voice entered a room before he did. He loved to make people laugh and spent his life doing so, weaving humor into every aspect of his life, even his Naval career. The Navy was both his career and his great passion, which enabled him to live all over the world. When he retired after 30 years, he turned that passion to his family, his church, various civic organizations, including Kiwanis, Sister Cities and the Navy League. He loved to sing and was a member of NewMexiChords in Albuquerque. New Mexico and the 1733 Chorus in Kearney. Rod is survived by his wife, Gale Stewart of Kearney; children, David Stewart of Albuquerque, NM Gayle Anderson and husband Rick of Albuquerque, NM, Kimberly Anderson and husband Kevin of Eaton, CO, Wayne Pickle and wife Juli of Kearney, Sami Stratton and husband Joe of Kearney; sister-in-law, Frances Haussemann of Las Cruces, NM; numerous grandchildren, and great grandchildren. Rod was preceded in death by his first wife Beverly (Park) Stewart, daughter Vickie Davis, grandchildren, Lizzie Stratton and Sylvan Pickle.

The family of Rodney L. "Rod" Stewart created this Life Tributes page to make it easy to share your memories.

Send flowers to the Stewart family.