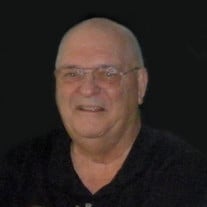 Ronald D. Nelson, 82, Kearney, died Tuesday, December 11, 2018 at Mother Hull Home in Kearney. Funeral services will be 10:30 a.m., December 14, 2018 at First United Methodist Church with Pastor Melody Adams officiating. Burial will be at the Kearney Cemetery. Visitation will be one hour prior to the service Friday at the church. Memorials are suggested to the First United Methodist Church. Ronald was born March 14, 1936 in Kearney to Ronald and Lucille (Andersen) Nelson. He grew up in Kearney and graduated from Kearney High School in 1954. Ronald then earned his Bachelor’s and Master’s Degree of Education and Music from Kearney State College. He joined the Army in June of 1958 and served for two years in the 8th Army Headquarters Band in Seoul Korea. Ronald married Mary Rockefeller on September 7, 1958 in Gibbon. After the service Ron was a High School Teacher for 36 years. He taught in Bertrand, Newman Grove, Gothenburg, and Plattsmouth. Ron’s life centered on music, being an instrumentalist, vocalist, and educator a majority of his life. He sang or directed the church choir throughout the towns he lived. Ron was also a fifty year member of the Rob Morris Masonic Lodge #46 AF AM in Kearney. Ron is survived by his wife, Mary Nelson of Kearney; son, Mike and wife Nancy Nelson of Omaha, NE; grandsons, Jack and wife Kate Nelson of Lake Villa, IL, Joe Nelson of Omaha, NE; sister, Judy Dietz of Amherst; brother, Roger and wife Jeannie Nelson of Lincoln, NE. Ronald was preceded in death by his parents and daughter Susan Marie Dreznin.

The family of Ronald D. Nelson created this Life Tributes page to make it easy to share your memories.